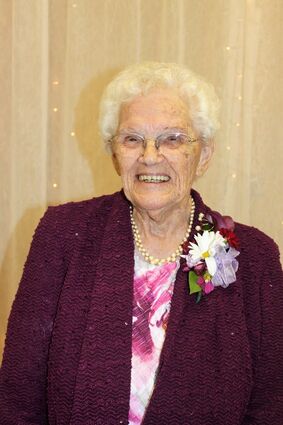 Maxine L. James, 105, passed away peacefully on December 16, 2021 in Kimball. Following her wishes, cremation and a family graveside service will be held. A Celebration of Life will be held in June at the Toombs Family Reunion in York, Nebraska.

Maxine Louise Toombs James was born September 11, 1916, in York, Nebraska, the seventh child of eleven born to Mable Carrie (Sommers) and Jefferson Edwin Toombs. Maxine spent many summers with her sister and brother-in-law's family (Hick and Eddie Hickman) in the Sandhills, staying until she finished high school in 1934.

Maxine worked for the Chester Johnson family and clerked in the Johnson store in Mullen, Nebraska. On September 19, 1936, she married Neal James of Mullen, in York. They worked on the Meyers ranch in Arthur as well as a ranch north of Ashby, where she cooked three meals a day. Stephen Lee was born in 1941. The family later moved to Alliance, where Neal worked at the slaughter house. In 1946, their daughter Vera Elaine was born.

In 1949, they moved to Kimball and started the Kimball Locker Plant. Neal and Maxine operated the locker plant for more than 30 years; they were hardworking and respected community members.

As a charter Kimball Eagles Auxiliary member, Maxine was very active and known for her renowned homemade pies. Maxine was one whom you could look to for trusted guidance, or a humorous line at just the right time. Her long-lasting family legacy will be cherished.

Maxine is survived by her granddaughter Roxy (Bill) Doogan; great-grandsons Pierce and Connor Doogan; great-granddaughter Leah Doogan; a host of nieces and nephews; numerous relatives and friends. She was preceded in death by her husband Neal; son Stephen Lee; daughter Vera Elaine; parents; five sisters, five brothers and their spouses.

Cantrell Funeral Home is in charge of arrangements.

Condolences and fond memories may be sent to http://www.cantrellfh.com

Memorials may be sent to: Kimball Eagles