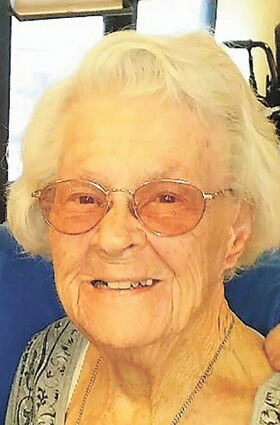 Nina M. Nelson, 94, of Kimball, died at SRMC Extended Care in Sidney on Friday, December 3, 2021. Cremation has been held and there will be no services. Private family burial will be held at a later date. Friends may visit http://www.cantrellfh.com to share stories and condolences with the family. The services for Nina have been entrusted to the Cantrell Funeral Home.

Nina Margaretta Nelson was born In Kimball on December 19, 1926, the daughter of John and Rosa (Winters) Gettel. Following her mother's death in 1935 she moved to Seward, Nebraska, to live with an aunt. Nina attended parochial school and graduated from the eighth grade while living with her aunt. She then returned to Kimball and graduated from the Kimball County High School in 1944.

She married Conrad Frohm on July 4, 1948, in Kimball. He preceded her in death in 1977. She later married Arthur Nelson on February 25, 1979, in Kimball. Nina worked at the Kimball Bakery from 1948 to 1981. Following her retirement from the bakery, she worked at GRI. Nina was a member of the First English Lutheran Church, Eagles Club Auxiliary and the VFW Auxiliary. She was also active in the Headstart Grandmother's Program.

Survivors include her children Bob (Della) Frohm of St. Joseph, MO, and Linda (Dave) Petersen of Tulsa, OK; five grandchildren and six great-grandchildren. She was preceded in death by her parents, both husbands, four brothers and six sisters.