GROOMING IN THE CHRISTMAS SPIRIT 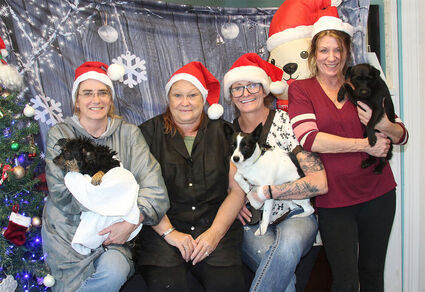 More than halfway through grooming 29 dogs on Saturday, Dec. 11, Wendy Held, Koye Knicely, Gretchen Green and Andrea Harroun pose for a picture at the Groom-A-Thon fundraiser for the Milhollin family.

The Christmas spirit is alive and well in Kimball as Gretchen Green, owner of Gretchen's Grooming, hosted a Groom-A-Thon fundraiser for a family.

Gretchen said, "I wanted to make sure those kids have a Christmas. I know how hard it is to not have their mom."

On Saturday, Dec. 11, Gretchen and her assistants held a fundraiser for the Tom Milhollin family. Tom's wife, Destaney, 29, died on Nov. 9 from a pulmonary embolism. According to Gretchen, she leaves behind her husband Tom, seven children, and three grandchildren ranging from ages 10-24.

When Gretchen announced her intention of having a Groom-A-Thon for the family, the appointments were taken in a 24 hour time period.

The customers included Dozer, a big muscular black and white pit bull, along with Tucker, Sheldon, Arlo, Cooper, Princess and many others.

Gretchen shared that "Tom and the kids came by and gathered up the money and we got hugs and thank yous from the kids and him, lots of tears from them."

In a heartfelt response, Tom Milholin said he didn't know what he could have done if he hadn't lived in Kimball, everyone has been so amazing and supportive including the school.

He said, "I don't really have words for everything that Kimball has done," and he continued with "Gretchen is amazing."