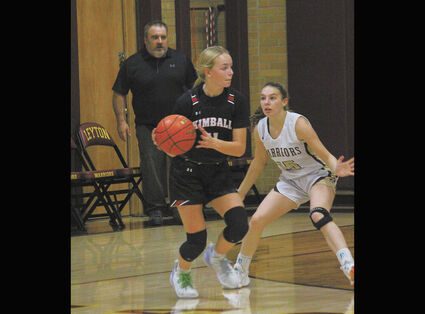 Chantel Malson works against the Leyton defense during Kimball's victory.

Despite dropping their first game of the season, the Kimball Lady Longhorns quickly rebounded and took their next two contests to start their season strong.

On Thursday, the Lady Longhorns traveled Bayard to match up with the Lady Tigers, and quickly fell behind as the smothering Bayard defense allowed very few shots by the Lady Longhorns. After falling behind 38-8 at the half, the Kimball squad did their best to fight back in the second half, but only managed 16 points and fell by a final score fo 54-24.

Kimball seniors Chantel Malson and Maddison Merryfield each had seven points in the l...