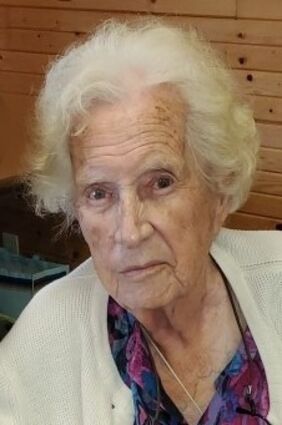 Katharine E. Nelson, 100, of Gering, passed away Wednesday, December 1, 2021 at Heritage Estates in Gering. A Mass of Christian Burial will be held at 10 a.m., Friday, December 10, 2021 at St. Agnes Catholic Church in Scottsbluff with Fr. Mike McDonald as Celebrant. A Rosary will be recited beginning at 9:30 a.m. Interment will follow at Fairview Cemetery in Scottsbluff. There will be no viewing and cremation has taken place.

Services will be livestreamed and recorded to Katharine's obituary page at http://www.reverencefuneralparlor.com. Memorials may be made to the Banner County Volunteer Fire Department or the Family Research Center.

Katharine was born October 3, 1921 in Scottsbluff to Philo and Helena Mary (Schumacher) Tillson. She graduated from Scottsbluff High School in 1939. Katharine went on to attend Scotts Bluff Junior College, where she worked in the school library. She graduated in 1941 as salutatorian of her class.

Katharine married A. Rudyard Nelson on January 7, 1952 in Scottsbluff. Four children were born to this union: Margaret, Marvin, Barbara and James. The family resided on the homestead where Katharine and her husband farmed.

Katharine was a dedicated farm wife, but also previously worked at JC Penny, OP Skaggs and Scottsbluff National Bank. She liked to keep active, read and learn. She enjoyed playing cards, cooking and sewing. Katharine researched her family genealogy throughout the years as well. She was a former member of the DAR Kathadin Chapter, LLL Extension Club and Banner County Museum.

Katharine was preceded in death by her father, Philo; mother and step-father, Helena and George Schmeling; husband, A. Rudyard; daughter, Margaret; son, James; a half brother; and a half sister.