Dedication Day Arrives For Naming Of Longhorns Court After Southards 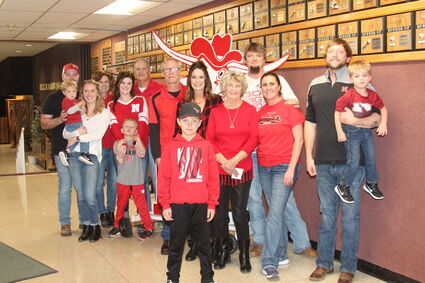 Four generations of Southard family members were in attendance at the dedication of Tom and Karen Southard Court at the Longhorns gymnasium.

After a solid win by the Longhorn girls varsity basketball team, Kimball Public Schools dedicated the gym court to Tom and Karen Southard. The dedication took place on Dec. 5, 2021, just short of a year since Tom's passing on Dec. 6, 2020.

Karen was joined by her family, including daughter and son-in-law, Shelly and Rick Olson, son and daughter-in-law, Doug and Kim Southard, grandchildren and great-grandchildren for the dedication.

Longtime game announcer Greg Robinson shared thoughts from the Kimball Public Schools: "Not only did Tom cover our students' accomplishments in the newspaper, Tom and Karen also kept stats for coaches, attended athletic banquets, and even team dinners. Tom and Karen were often the first to arrive at an event and, most times, one of the last to leave. Tom always liked to recap the games with the coaches before they called it a night. One can only imagine the miles driven and hours in bleachers these two spent together, not to mention the students' lives they touched in positive ways."

An emotional Robinson continued, "Tom and Karen were more than sportswriters and wife. They are possibly the greatest Longhorn fans of all time. Their passion for our school, coaches, and athletes was unmatched. The names of Tom and Karen Southard will always stand the test of time in our school and community."

Claiming not to be a public speaker, Karen Southard eloquently spoke about Tom's sports writing career.

"I was a tag-a-long," Karen said. "I went to everything. He decided well: 'She doesn't need to just to sit there. She can learn to do the stats.'"

After years of doing stats, she said it felt funny to be at the game without her pencil.

Although neither Tom nor Karen played their sports on the existing gym floor, their children played there as well as their grandchildren.

"And now we have some little great-grandkids that will play on this court with their great grandparents' names on it," Karen said. "How awesome it that?"

Karen concluded her remarks with a special memory from 2019.

"Tom's birthday was on Jan. 31, his birthday fell on a game day, so all the boys and girls basketball team crowded around us and sang happy birthday to him," Karen said.

That was an extraordinary moment for Tom.

Tom's last Jock Talk column in the Observer was printed on Nov. 26, 2020, and on Dec. 6, 2020, he succumbed to COVID pneumonia at Great Plains Health in North Platte surrounded by his family.