One Hundred Years Of Faith 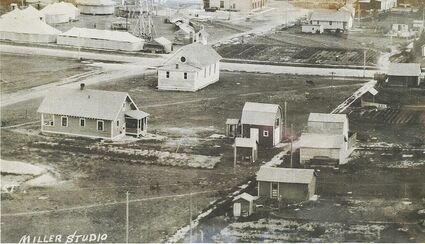 Kimball's original St. Joseph's Catholic Church, the building with the steeple near the top center of this historic image, sat along 2nd Street across the road from the current Dollar General location.

On Sunday, Dec. 5, St. Joseph's Catholic Church in Kimball will celebrate 100 years as a parish. Most Rev. Joseph Hanefelt, Bishop of Grand Island Diocese, will be in Kimball to help celebrate this milestone of faith.

In those 100 years, the people of St. Joseph's built a new brick church, a parsonage, and an elementary school while dozens of clergy have past through the doors of St. Joseph's teaching to the faithful.

Before 1921, area Catholics practiced their faith in homes, including those of "Grandma" Mary Lynch, Art Bickel, Pat Maginnis, Jim Kinney and Ed Roche. Then in 1911, on land donated by Pat Maginnis, a simple white wooden church was constructed just south of the current Dollar General Store. The white church held about 50 people, and neighboring priests traveled to Kimball regularly to say Sunday Mass.

Although local church documentation reports that the first church was built in 1911, an article in the Oct. 17, 1912 edition of the Observer explained, "Arrangements have been made for the building of a Catholic church in Kimball, work to begin at once. Father Kauffman of Sidney was here Saturday conferring with members of the church and completing arrangements. The necessary money has been raised, and the work will be rushed to completion. The church is to be erected on lots two blocks west of the Fraternal Hall."

In the same edition of the Observer, a general scolding went out to Kimballites: "The churches of Kimball are not as well attended as they should be, and it is discouraging for the pastor to talk to a small audience. People should not forget that they owe something to their spiritual welfare as well as to the material being, and in the mad scramble for the mighty dollar, they should pay some attention to the Almighty who gave them life and health to carry on the struggles of this world."

As St. Joseph's congregation began to grow, the little church was expanded to seat 110 people and used until 1951.

St. Joseph's had a number of different priests in the first years of being a parish. Father Patrick Moriarty was the first permanent priest. The Nov. 17, 1921 edition of the Western Nebraska Observer provides notice that "Mass at St. Joseph's church, Kimball, Sunday, November 27th, at 9:00 o'clock a.m. Mass at Potter at 11:00 o'clock. Confessions heard before mass. Rev. P. M. Moriarty."

Father Moriarty lived in a small room attached to the rear of the church. When the neighboring brick rectory was built, those rooms became the sanctuary and sacristy.

The Observer discovered from Sept. 29, 1921, to the end of the year, Father Moriarty put notices in the paper for Mass times and other notifications. Mass times changed weekly from 7:30 a.m. to 10:00 a.m.

Father Moriarty was followed by Father Lambert Heinen for a year, then Father Henry Keil, and then Father Michael Lyons.

Finally, in 1928 Msgr. Lawrence A. Kintz lead St. Joseph's parish for almost 40 years until his death in 1967. Msgr. Kintz was known and respected throughout the entire community.

In an effort to save people money during the depression, Msgr. Kintz travelled for a short period of time to a Catholic Church built in Bushnell. According to Kimball County, Nebraska 100 Years, "The Bushnell area felt they could pay the expenses for Monsignor Kintz to come to Bushnell, rather than the Bushnell families all driving to Kimball."

Msgr. Kintz was instrumental in the growth and success of the St. Joseph's. Under the direction of Msgr. Kintz, the current brick church at Sixth and Howard was built in 1951 with capacity for 400 people. And next to the church, the rectory was built in 1957.

The rich history of St. Joseph's Catholic Church is a valuable part of the history of Kimball County.