Cody-Kilgore Too Much For Coyotes In D6 Final 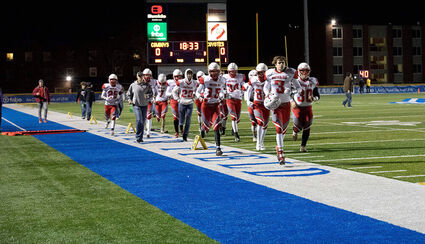 Lisa McConnell / For The Observer

The pride of Potter-Dix, the football Coyotes, take the field at the Class D6 state championship game. They had a season of highs and finished one game short of their goal.

The historic season that the Potter-Dix Coyote football team enjoyed came to a disappointing end Friday night in Ron and Carol Cope Stadium at the University of Nebraska-Kearney, as they fell to the Cody-Kilgore Cowboys by a final score of 65-37.

The Coyotes' run fell just short of a state championship as the Cody-Kilgore running attack proved to be too much for the Coyotes to stop for four quarters. The Potter-Dix team ended the season with an 11-1 record, a runner-up trophy, and a host of team and league records reflecting on their successful season.

The accomplishment this team has achi...