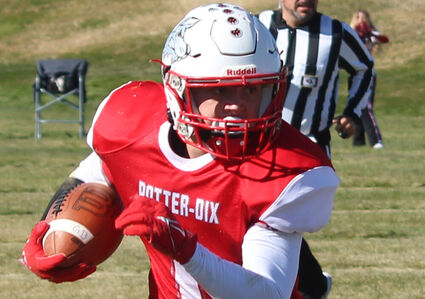 Senior Jared Anton had an all-around stellar game against Spalding Academy with three touchdowns and 19 points.

The number 1 ranked Potter-Dix Coyote Football team continued their historic season on Friday, holding off a late surge by the number 13 ranked Spalding Academy Shamrocks to punch their ticket to a State Championship game in Kearney, the first in the school's history. The Coyotes will face their biggest challenge of the year against the Cody-Kilgore Cowboys on Friday.

In Spalding, the teams started with chilly temperatures and gusting 30 mph winds which affected both teams.