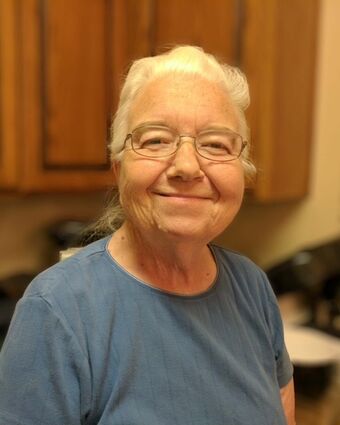 Martha J. Yung, 78, formerly of Kimball, died in Arizona on October 27, 2021. Memorial services will be held at 10:00 a.m. on Saturday, November 6 at Cantrell Funeral Home with Richard Gasser, Marge Major, and Julie Harthorn officiating. Interment will be held at the Kimball Cemetery.

Friends may visit http://www.cantrellfh.com to view Martha's Tribute Wall and leave condolences and stories for the family. Memorials may be given in her memory to the Plains Historical Society of Kimball or to the family. The arrangements for Martha have been entrusted to the Cantrell Funeral Home.

Martha Jane Yung was born on August 23, 1943, in Anadarko, Oklahoma, to Marcel Ervin and Ola May Updegrove. Martha had three older siblings and grew up in several towns in Oklahoma. She attended various schools there. She committed her life to her Heavenly Father in 1956. She loved her Lord, fellowship meetings, ministers, and friends and family. She completed high school in 1963 and started working in the Oklahoma State permit office.

She met Dale Yung that year, and they were married November 30, 1964, in Stillwater, Oklahoma. They farmed and ranched south of Kimball until retiring to Kimball in 2017. Martha worked several years at GRI in Kimball making many lasting friends there. She was always a full-time homemaker and farm wife.

Playing hymns on her piano and singing was her favorite relaxation activity, as well as reading, especially her Bible. Her hobbies included sewing, painting, quilting, crocheting, and gardening wherever a large garden was available. She loved having family and friends visit in her homes in Kimball and in Apache Junction, Arizona, where they spent the past dozen winters.