Malson Runs Her Way To State 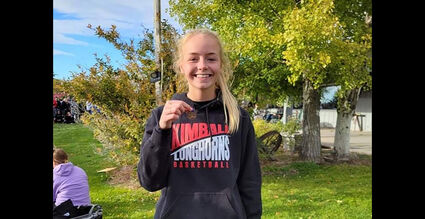 Chantel Malson of Kimball XC placed 12th in the district cross country meet and qualified for State. That's Chantel with her medal.

Coach Tiffany Johnson told the Observer, "We are very proud of Chantel for being a four-time state qualifier. She ran a great race, and we look forward to seeing her compete in Kearney on Friday." Malson placed 12th with her season best time of 22:09. Peyton Paxton, a freshman from Mullen, won the districts race with a time of 20:35.90.

Filling out the Kimball team at districts was James McGinnis in 46th place with his personal best of 21:54 and Joseph Bremer's season best of 22:33 that put him in 52nd place.

Johnson said, "The boys competed hard and put out great effort; they just fell short. I am so proud of them and look forward to what is in store for us next season."

Damin Luedke of Paxton won the boys district meet with a time of 17:05.65.