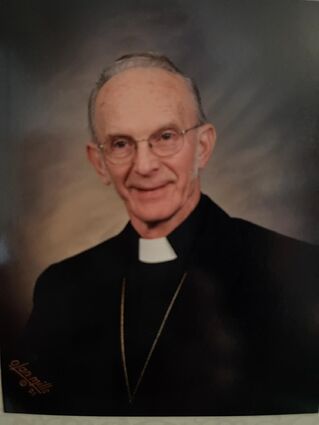 Funeral Services will be held at 10:30 AM, Saturday, October 16, 2021, at St. Paul's Lutheran Church in Sumner with Rev. Tanner Post and Rev. Ronnie Koch officiating. Inurnment will be held at a later date at Lutheran Cemetery of Sumner Township, rural Sumner. Military rites will be provided by Thomas E. Woods Post #223, American Legion of Sumner. Visitation will be from 4:00 PM to 7:00 PM on Friday, October 15th at St. Paul's Lutheran Church in Sumner and for one hour preceding services at the church on Saturday. Memorials may be made in Rev. Jeske's name to Concordia Theological Seminary, 6600 N. Clinton St., Fort Wayne, Indiana 46825 or St. Paul's Lutheran Church in Sumner, 612 W. 3rd St., Sumner, Iowa 50674. Becker & Son Funeral Home in Sumner is assisting Rev. Jeske's family. Online condolences may be left at http://www.beckermilnesrettig.com.

"You have turned my mourning into dancing for me; you have taken off my sackcloth and clothed me with joy." Psalm 30:11

Alvin, son of Erich and Olga (Bauch) Jeske was born January 14, 1930, in Milwaukee, Wisconsin. He was baptized in March of 1930 by Rev. Carl Otto, Sr. and confirmed April 2, 1944, by Rev. J.C. Miller at Holy Ghost Lutheran Church in Milwaukee. Alvin graduated from Kewaskum High School in 1948, enlisted in the United States Navy, serving aboard submarines USS Bugara and USS Caiman from December 9, 1948 to December 11, 1952 when he was honorably discharged. Upon discharge from the military, he enrolled in college under the GI Bill, graduating with Honors and a B.S. in electrical engineering from San Jose State. On June 29, 1957, he was united in marriage with Linda Karen Stein at First Immanuel Lutheran Church in San Jose, CA with Rev. Arthur Brommer officiating. To this union four children were born, Ruth, Carol, Bert and Sara.

Alvin worked as an electrical engineer at P.E.K. Labs in Mountain View, CA and then at Varian Associates in Palo Alto, CA. In 1968, Alvin and his family were living in Sunnyvale, CA, when he answered God's call to the ministry. The family moved to Springfield, Illinois where Alvin began Pastoral training at Concordia Theological Seminary. He served his Vicarage year at St. John Lutheran Church, Wellsburg, Iowa and graduated with a Master of Divinity in May of 1972. He was Ordained to the ministry at Our Savior Lutheran Church, Cupertino, CA and began his active ministry at St John Lutheran church in Kimball, Nebraska. His next call was to Sumner, Iowa, where he served the dual parish of St. John's and St. Paul's Lutheran Churches from 1976 until 1989. He then served St John in Motley, MN until retirement in 1995. Even though he was officially "retired", he never stopped serving the Lord. He continued to answer God's call to ministry by serving many churches in the Brainerd Lakes, Minnesota area including Trinity Lutheran Church in Staples, Mission of the Cross Church in Cross Lake, Zion Lutheran Church in Crosby, Emanuel Lutheran Church in Iron Hub, Redeemer Lutheran in Verndale and Immanuel Lutheran Church in Bartlett Township. In 2015 his health prevented him from serving the Lord in this manner, Pastor and Linda retired once again to Sumner, Iowa to be near family. While many knew him as Pastor, his family knew him as Dad, Grampa, Papa and Gramps. He was a man who we believed could fix anything, even broken hearts. He was a skilled electrician, plumber, and woodworker, and enjoyed model railroading, fishing, hunting, and camping. He was a member of the American Legion, where he was appointed as Chaplain, England Prairie Pioneer Club in Verndale MN and Northeast Iowa Antique Engine Group in Fredricksburg, IA. While participating in the later clubs, he realized that he could combine his love of engineering, modeling and creating with his fond memories of growing up in the farm country of Wisconsin and began creating a legacy of 1:16 scale working replicas of antique farm equipment and buildings.

In addition to his parents, he was preceded in death by his siblings, Lawrence, Robert, Frank and Harvey Jeske, Betty Scherzer and Ruth Bunkelmann.