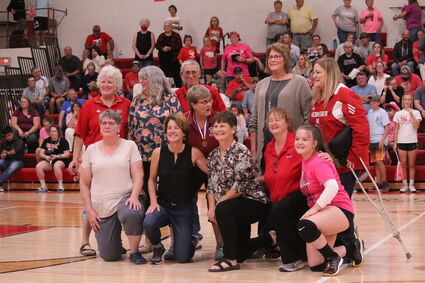 The 1979 State Championship Longhorn team was honored between sets at the Kimball/Morrill match on Thursday. Right: Kimball outside hitter Jayden Paxton goes up for a drop shot during the Lady Longhorns' victory over Morrill.

Kimball's Lady Longhorn volleyball team has not had many wins this season, but it earned a special victory Thursday as the school honored the 1979 Kimball State Champion Volleyball Team.

It was 50 years ago when the NSAA established the State Tournament for Volleyball, and schools all across Nebraska have been honoring their prior championship teams all season. On Thursday, the Kimball 1979 Class B State Championship team, which went undefeated and did not lose a set in the tournament, returned to Kimball to be recognized.

Between the second and third sets, the members of the team came out...