Another Fine Showing For Longhorn Pair At District 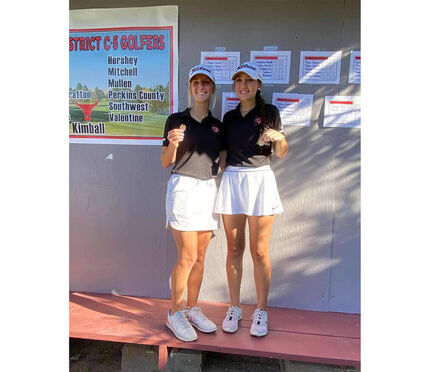 Payton Wise and Katie Heeg are taking Longhorn Nation back to State.

Wise qualified by winning her third straight District C-5 individual championship Monday with a round of 80 at Four Winds Golf Course. Heeg, meanwhile, carded 92 for fourth.

Also competing for Kimball was Mariana Cajero, who continued her progress this season with 65 on the front nine and 64 on the back for a round of 129.

Mitchell won the team title with a team score of 380, 16 in front of runner-up Valentine.

Next up for Heeg and Wise is the Nebraska State Tournament – 9 a.m. next Monday, Oct. 11, in Columbus. Both qualified for State last year as members of Kimball's nice 2020 team under coach Katie Culek.

This time around, Wise will be looking to round out her high school golfing career with four consecutive medalist performances at State. She has a question to answer: How high will she go?

The Kimball duo placed first and second in the Kimball Invite at Four Winds earlier this season, and in District they played even better.

Heeg shaved off five strokes off her invite score to get to 92 and Wise dropped three for her 80. Wise shot 41 on the front nine and 39 on the back at District. Heeg was at 45 and 47.