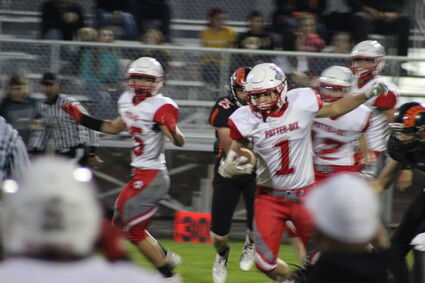 Jared Anton (1) rushed for 132 yards and three touchdowns in Potter-Dix's win over Crawford that improved the Coyotes record to 3-0 on the season.

A strong start and a big second quarter by the Potter-Dix Coyotes was too much for the visiting Crawford Rams to overcome, and the Coyotes moved their record to 3-0 with a big 65-25 win Friday night in Crawford.

Potter-Dix held off the Rams in the first quarter, opening a three point lead, then scored three touchdowns to open up a 34-17 lead going into the halftime intermission.

Any chances of a Crawford comeback were dashed in the third quarter when the swarming Coyote defense shut down the Ram offense, while scoring three more touchdowns in the quarter. Two more Coyote scores against one Ram score in the fourth quarter put the game away for the Potter-Dix squad.

Junior Luke Kasten rushed four times for 18 yards and a touchdown, and caught two passes for 119 yards and two touchdowns.

Both Anton and senior Thomas Muldoon had 15 total tackles to lead the defense, while Muldoon grabbed an interception and was 4 of 6 in extra point kicks.

Potter-Dix travels again on Friday to take on the 3-1 Arthur County Wolves.