But It's Early In The Process For Proposal With Uncertain Future 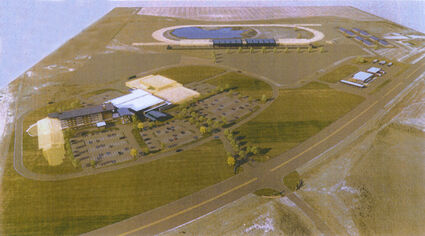 Will the proposed Kimball casino and horse track, pictured above in an architect's rendering, ever happen? It's far to early to say, but the developer, Kimball County Commissioners and Kimball City Council are all aboard with the plans at this point. Below: An overflow crowd attends the joint meeting of the council and commissioners at KCTS to hear the proposal.

An overflow crowd attended the joint meeting of the Kimball City Council and the Kimball County Commissioners. The officials and public heard a presentation in which developer Canterbury Park Holdings proposed a horse racing track and casino for Kimball.

It's clear that this proposal is in the very early stages and its future is uncertain.

Tom Sage, executive director of the Nebraska Racing and Gaming Commission, provided the Observer with some background information on racing and gaming.

Sage said there are two separate licenses that can be applied for – a racing license and a gaming li...