Pioneer Family Spirit: Barretts Have It 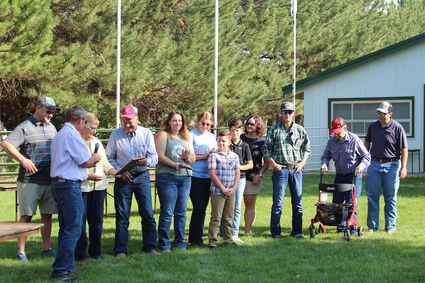 The Dan and Linda Barrett family.

Since the 1950s, the Aksarben Foundation has been celebrating Nebraska farm families with its tradition of awarding Pioneer and Heritage Farm Family Awards.

Banner County residents Dan and Linda Barrett were awarded this year with the Pioneer Farm Family Award, which recognizes 100 years of ownership. The award is presented by the Aksarben Foundation in partnership with the Nebraska Farm Bureau and the Nebraska Association of Fair Managers.

Below is Dan Barrett's application information for the Pioneer Award:

"Anderson and Bertha Barrett bought the farm from Robert and Fred Garrard in June 1921, after leasing the farm a year before that. Anderson and Bertha bought a farm for each of their sons. The family moved to the farm in September of 1920, the same day Dan's Aunt Bertha was born on the farm. She lives in Cheyenne yet today.  More ground was bought from the Garrards in the following years, and five Barrett descendants still own the original ground today except for a half section.

"The Barrett farm is always associated with the unique stone barn that dominates the farmstead. The Garrard brothers built this in their earlier homestead years. It is built from native limestone, which was hauled from the Blake place just over a mile north. There are very large stones over doors as headers.  The story of how they got these in place seems unfeasible to me, but it is the story that came with the barn. The Garrard's built a catwalk along the barn wall and they allegedly used a blind mule to drag the large rocks to their desired position. They then rolled the stone from the catwalk to the growing barn wall.

"We were always told stories about summer and fall community get togethers and dances held in the hayloft of the barn. Men would load Grandma's piano in a truck, back it up to a hayloft window and muscle the piano from the truck to the hayloft. I suppose in the depths of the depression these get togethers were welcome reprieves from their struggles to survive the dirty '30s.

"Grandpa had many hired men in the summers and as a small kid I can recall numerous of these men stopping in to call on Grandpa. Not hardly any of them didn't remark about if there was nothing else to do, you got two buckets and hauled water to Grandpa's cherry and apple trees behind the house."