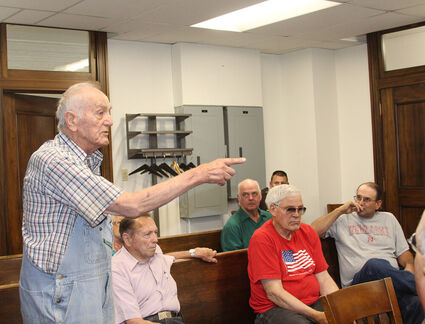 Kimball County farmer Paul Heidemann speaks to the county commissioners Tuesday while other area farmers wait their turn to talk about making bindweed a noxious weed.

Topping the Aug.3 Kimball County Commissioners meeting agenda were farmers and landowners trying to get bindweed added as a noxious weed. Everyone agreed that it would cost more in taxes to control it, but Dave Hagstrom said, "Need to do it yesterday, not tomorrow."

Weed Superintendent Rick Wrangler said that bindweed could not be eradicated, but it can be controlled. Banner County and Cheyenne County both have it classified as a noxious weed.

After a lengthy discussion from the area farmers, it was decided to hold a public hearing temporarily set for October to determine the course of action. A public hearing must be held according to the statute.

As far as the records show, bindweed has not been on the noxious weed list since at least 2001, but everyone agreed that it has made a comeback and is creeping from roadways into pastures.

Meanwhile, Kimball Health Services officials met with the commissioners to announce that the USDA approved a $23.4 million loan for the hospital project.

Documents are expected to be signed later by the commissioners for the $6.4 million "limited tax building bonds." If Kimball Health Services were to default on the payment, officials said it would be the only time that taxpayers would have any responsibility for project cost.

The officials expect to begin construction as early as late September or October.

Randy Bymer, County Highway Superintendent, explained that according to the operators, the county roads were "like concrete," but the graders were out trying to fix the washboards on the roads.

Sheriff Harry Gillway had a Life-Saving award for new deputy Cole Saunders for an incident on the interstate.

Gillway also explained that four additional AED units were obtained through a grant, and they will go into vehicles. With the budget season on the horizon, Gillway confirmed that the sheriff's office has three "surplus, obsolete not useful to the county" vehicles. It was discussed that those vehicles would be placed for sale on Big Iron.

A general discussion occurred as to the possible usage of the acreage owned by the county that is adjacent to the High Point Welcome Center. No action was taken.