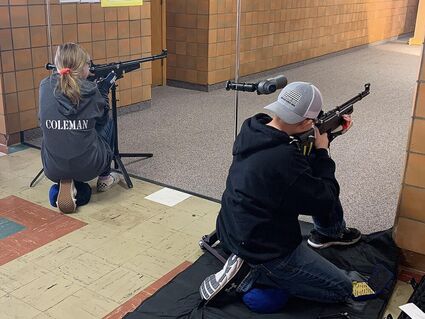 Practice paid off for Anna Coleman of the Dead Eyes Shooters 4-H Club. Coleman, shown shooting this year, finished in the top 20% at the Rushmore National Invite.

When the going gets hot, Kimball's Dead Eye Shooters get going.

Dead Eye Shooters 4-H Club members weathered a heatwave at the Rushmore National Invitational last weekend to turn in some of their best performances.

"It was a great event," coach Nicole Snyder told the Observer. "We are very proud of the kids – many of them shot their personal best scores despite the heat. It was 100 degrees one day with no air conditioning."

Dead Eye Shooter Anna Coleman had a great competition, placing 36th overall out of 190 competitors. She also placed 10th in the prone position with a score of 98 out of 100.

Julia Winstrom ended her BB gun career with a 71st place finish and won a 10th place medal in the standing position with a score of 94.

Chris Foster competed in the Out to Pasture Division, placing 11th in a field of 15. This division was offered for those kids who were unable to participate in Daisy National BB Gun Match last year due to its COVID cancelation.

Because of that situation, the Out to Pasture kids were too old to participate in this year's national match for ages 8 to 15. Once they turn 16, they are ineligible.

Going to the national competition was an accomplishment in itself.

Coach Snyder said that "after Daisy had to cancel the Daisy National Match this year due to COVID restrictions, we didn't think the kids would be able to compete at a national match, as there are no other national BB matches held in the United States.

"A dedicated group of coaches and parents stepped up and made the Rushmore National match happen! We really appreciated all their hard work and for providing the opportunity for our kids. We are also thankful to the Kimball Pheasants Forever Chapter for their donation of a rifle for us to raffle off, to the Kimball-Banner 4-H Council for financial support and Barb Barker for team shirts."