'I Like Animals; They Don't Talk Back,' Says Kimball Pet Groomer 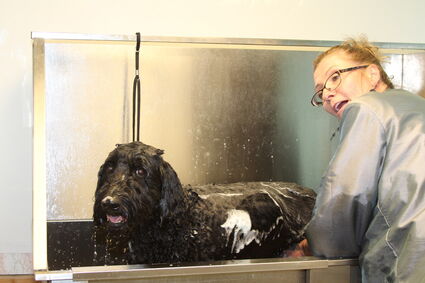 Repeat customer Violet gets a bath from Kimball's Gretchen Spitz to begin her grooming session.

Most afternoons, Gretchen Spitz will be at her new salon on West Highway 30.

Her clients are every age, size, color and breed – of dogs, as well as some cats. But her clientele doesn't stop there; she has "clipped bird nails, bathed ferrets, and rabbits."

Gretchen said, "I like animals; they don't talk back."

Although occasionally, they do bite back. Gretchen has been bitten, and her assistant, Koye Knicely, has had a bite taken out of her, but that hasn't deterred either one of them from providing the service.

In the mornings, Gretchen manages the Phoenix Conoco right off the interstate, and there she deals with employees and a steady stream of customers. But in the afternoons, she will groom at least five dogs at her business, Gretchen's Grooming.

In the summer, she does leave time for other favorite activities – riding motorcycles and camping.

After four years at her previous location next to the Kimball Public Library, Gretchen moved into a building more suitable and roomier. She installed two grooming stations and two stations for blow-drying and cutting hair, along with built-in kennels for those waiting for their appointments.

Gretchen's has a wealth of experience in hair design. She started out doing people's hair; she was a certified hairstylist.

Then she transitioned to 4-H animals when her kids had lambs and other critters. Later she owned a pet store and learned dog grooming at that point – and she said it isn't a far cry from styling peoples' hair. She is not afraid to admit that sometime a cut is a little "trial and error," or she goes to YouTube to get professional advice.

In 2013, she got out of the pet business and grooming business but not for long.

In November 2017, she jumped right back into grooming, and it all happened as a fluke. A customer was broke down at Phoenix Conoco with a camper. They ended up giving her the camper with the promise that she would go back to grooming dogs using the camper. She used the camper for about two weeks but immediately outgrew it.

Her advice: "You won't ever be broke or hungry if you know how to bathe and groom a dog. You will always have a trade that people want."

Since the beginning of the year, Gretchen's Grooming has attracted 50 new customers, some local but many outside the area. She has customers from all over – Scottsbluff, Sterling, Cheyenne, Sidney, Bridgeport and individuals off the interstate needing a pet groomed.

The process is the same for most dogs. They get a rough cut, then a bath. Next is the cleaning of the ears and a good tooth brushing. Finally, the customer receives their final cut and style.

In the not too distant future, Gretchen's Grooming will have a self-service bathing station, open 24 hours a day.

Not everyone thought a dog grooming business would be successful in Kimball, but if wait times are any indication of success, a month or two wait time is not uncommon.

Gretchen is highly appreciative of the tremendous support she has received in the Kimball area and the surrounding communities.