Kimball's Highest Finisher Was Johnson At 14th In The Pole Vault 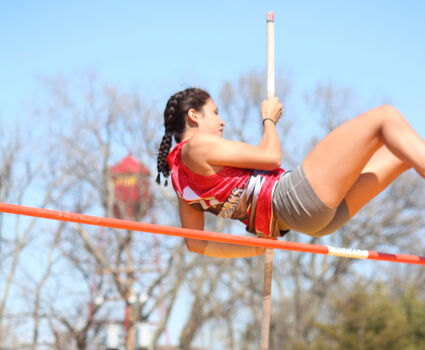 Kimball senior Raven Johnson clears the bar on her way to winning in the pole vault at the recent Cheyenne County Meet. At State, she cleared 9 feet to place 14th.

Seniors Christian Allen-Van Pelt and Raven Johnson and junior Kaitlyn Heeg represented the Longhorns, and each athlete went against the best in their class from the entire state.

Allen-Van Pelt was the only State qualifier from the Longhorns boys squad, and he finished in 20th place overall in the long jump with a leap of 18 feet, 11.25 inches. That was significantly off from his season's best jump of 20 feet, 6.5 inches at District.

Johnson had a successful 2021 season in pole vault, placing first or second in each competition of the year.

At State, she was able to earn 14th place by clearing 9 feet, a bit under her season's best of 9 feet, 4 inches at District.

Heeg qualified for two events, the 100-meter hurdles and the triple jump. She did not qualify for the finals in the hurdles and placed 22nd overall.

She also did not qualify for the finals in the triple jump and placed 24th.

Although all of Kimball's State qualifiers were upperclassmen, Kimball has a strong group of younger athletes that should continue to strengthen the improving Longhorns for seasons to come.