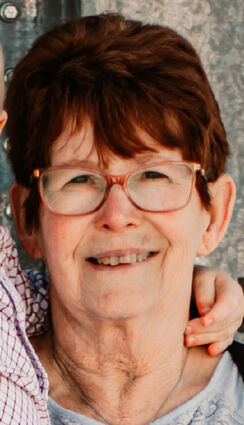 Deborah Trofholz Albertson, 66, of Gering, went home to heaven on May 16, 2021 surrounded by her loved ones. Services were Tuesday, May 25, 2021 at 11 a.m. at the Zion Evangelical Church in Scottsbluff, followed by interment at the Kimball Cemetery. Dugan-Kramer is assisting the family with arrangements and online condolences may be left for the family at http://www.dugankramer.com. The service was live streamed through the Dugan-Kramer Facebook page.

Memorials may be given to the Zion Evangelical Church or online at Team Jack, which helps battle childhood brain cancer, at teamjackfoundation.org.

Deb was born and raised in Kimball, Nebraska on September 20, 1954 to Dale and Frances Trofholz. She attended school in Kimball. On April 16, 1972 she married Richard Eich and together they had Steve and Stephanie. She managed Pizza Hut and also worked at Vince's Lounge. Once Rich's Wrecking was up and running she was the glue that held the place together.

Later on, she bought the Wooden Keg in Kimball and eventually sold it after purchasing The Point at Lake Minatare. If the walls could talk in those places! After taking a few years off, she decided to give the restaurant business another whirl and bought the Skyport Restaurant. In 2011, she decided she no longer wanted to cook so she went to work at Wal-Mart and worked there until she no longer could.

In her younger years, she loved to bowl, shoot sporting clays, and drive in demolition derbies. Later on in life her hobbies became traveling, gambling, and being 'Mach' to her boys and she followed them wherever they took her.