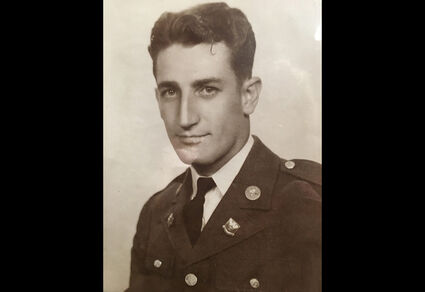 The remains of Army Air Corps Staff Sgt. Penrod L. Reader of Kimball have been in the Philippines since World War II, when he died due to the historic Bataan Death March. A technology from decades later – DNA testing – is expectd to factor in his remains being returned and buried in Kimball Cemetery.

It won't happen this Memorial Day, but by Memorial Day 2022, the extended family of World War II Staff Sgt. Penrod L. Reader of Kimball should be able to honor and bury him here in the United States.

Since last August, DNA testing has been in the works, and if a match is confirmed, Reader's remains of will be brought home from the Philippines.

The official declassified documentation lists the 21-year-old Reader as a Japanese POW, P. I. (Philippine Islands). He succumbed to death from malaria and inanition (lack of nourishment) at Cabanatuan Prison Camp.

The date of death was listed as 12 July 1942. The United States had just entered World War II, and Reader was one of the thousands who died due to the Bataan Death March.

"I have waited 60 years; I can wait a little longer," Carla Reader Kirby of Kimball said about having the remains of her uncle returned to the family and buried here alongside the rest of the family at Kimball Cemetery. The process is in the works, but due to COVID-19 it is extremely slow. It has just taken longer than expected because everyone is working from home, Kirby explained.

Due to the advancement of science and the political pressure from Vietnam War-era families and advocacy groups, the identification of MIAs and prisoners of war began in the late 1990s. The most famous serviceman identified through DNA testing was the Vietnam War's Unknown Soldier in Arlington Cemetery. The Air Force pilot was exhumed, DNA tested, and re-interned at home in Missouri.

Penrod Louis Reader was the youngest son and second to the youngest child of Iris and Frank Reader. Their children were Alice, Carl (Buck), Barbara, Bette, Penrod and Frances. Frank's brother was Carl or Buck Reader, and he was married to Winona. Their children: Tom, David, Penrod Alan (born in 1944 and named after his uncle), Sara and Carla Kirby.

Penrod graduated from Kimball County High School in 1939, and by November he had enlisted in the Army Air Corps.

According to a letter from Penrod to a relative in September 1941, while at Lake Charles, Louisiana, participating in a mock warfare operation. He entertained the reader: "We are camped in a pine grove about two miles from the Air Port. It is a regular swamp and has all the trimmings such as snakes, lizards, mosquitoes, and ants. Apparently I am a delicacy to them cause they certainly feast on me. Last nite I was too tired to sleep soundly, and I tossed around quite a bit. Sometimes during the nite my leg slipped out from under the mosquito bar and was, shall we say, exposed?"

After their mock warfare campaign, the Squadron then return to Savannah, Georgia, on Sept. 31, 1941, and rumor was they were going to the Philippines.

The rumor was true.

By the middle of October, the 17th, 16th and 15th squadrons were packed and headed to San Francisco. They would board the USS Coolidge on Nov. 1, stop in Hawaii, and finally land on the Philippines Islands.

Assigned to the 27th Bombardment Group, 16th Bomb Squadron, Reader was a tail gunner on an A-24. The A-24 was a two-person plane with two .50-caliber fixed machine guns in the nose and twin .30-caliber flexible machine guns in the rear cockpit. The aircraft had a range of 950 miles and carried 1,200 pounds of bombs.

Although the United States had not entered World War II yet, the A-24s were to be used to defend the Philippines.

With the knowledge that war was imminent, the 27th Bombardment Group was to strengthen the American defenses on the Philippines, where they were to meet up with their planes, which were shipped in crates to the Philippines.

The men arrived on Nov. 20. On December 7, 1941, the Imperial Empire of Japan attacked Pearl Harbor, Hawaii, and then, two days later, the Imperial Japanese Army attacked the Philippines.

The 52 crated A-24 Banshees planes were diverted to Australia because of the Japanese attack, and the U.S. 27th Bombardment Group and Filipino forces fought on the Bataan Peninsula as infantry.

The Reader family will never know the details of how and when Penrod died, but his Report of Death is considered a Special P. I. Case from a Declassified File, and although checked as a non-battle death, additional data on the form describes his condition:

"The individual named in this report of death is held by the War Department to have been in a beleaguered status from 8 Dec 1941 to and including 6 May 1942 and absent in a missing in action status on or subsequent to 7 May 1942 and until such absence was terminated on 29 July 1945, on which date evidence considered sufficient to establish the fact of death on 12 July 1945, was rec'd by the Secretary of War from a commander in the Southwest Pacific Area."

When Penrod was re-interned in Manila, his sisters Barbara and Alice traveled to the Philippines for the ceremony.

The United States was shocked and reeling from the devastating attack at Pearl Harbor – and Americans paid little attention to the Japanese attack on the Philippines.

It was obvious that the Japanese had the upper hand in this region because on March 11, 1942, Gen. Douglas MacArthur was ordered by President Franklin Roosevelt to leave Corregidor, a tiny island at the mouth of Manila Bay. According to History.com, "Left behind at Corregidor and on the Bataan Peninsula were 90,000 American and Filipino troops who, lacking food, supplies, and support, would soon succumb to the Japanese offensive."

A young Kimball County resident was one of the 90,000 men left to fend for themselves.

The rest of the story of Staff Sgt. Penrod Reader will continue in the Observer with the results of DNA testing.