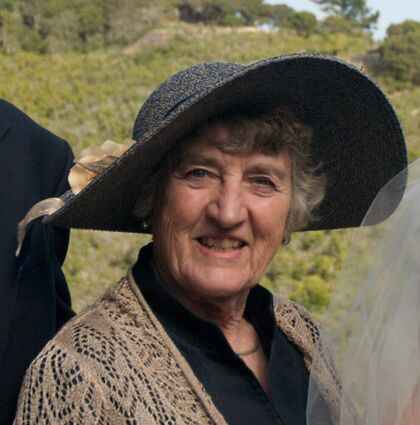 Beverly Ann Atkins passed away on May 14, 2021 at Kimball Health Services after a protracted bout with multiple myeloma cancer.

A graveside service for family and church members will be held at Kimball Cemetery on Saturday, May 22, 2021 at 10:30 a.m. with Pastor Alan Foutz officiating. Friends may visit http://www.cantrellfh.com to view Beverly's Tribute Wall and leave condolences and stories for the family. Visitation will be held on Friday from 1:00 until 6:00 p.m. at the Cantrell Funeral Home.

Memorials may made to the Kimball Presbyterian Church, Festival of Hope (http://www.festivalofhope.net/), Kimball Hospital Foundation Building Fund, or donor's choice. The services for Beverly have been entrusted to the Cantrell Funeral Home.

Beverly was born on October 10, 1935 in Merna, Nebraska to Herbert Julius and Dora Belle (Smith) Schmidt. The family moved from Custer County to Morrill when Beverly was 4, and she grew up there during World War II, graduating from Morrill schools in 1954.

Beverly attended Hastings College, receiving an elementary education degree in three years (as her father told her that was all the college he could afford). After graduating, she taught elementary school in Gering; Los Alamos, New Mexico; and Alliance.

She met her future husband, Kendall, through Scottsbluff County Rural Youth, and they married on May 28, 1961. The couple lived in Chadron until taking over operation of the family farm and ranch west of Dix in 1962. Beverly taught in the Kimball Public Schools until the birth of their son, Vance, in 1968. Beverly was a partner in all tasks of farm and ranch life, sharing work and duties, including moving irrigation pipe, driving tractors, feeding cattle and occasionally running off misinformed trespassers. Many harvest meals were shared on the tailgate of a pickup, and she was often employed in finding those hard-to-reach bolts on the old John Deere combine during field repairs.

Ralph Waldo Emerson said, "The purpose of life is not to be happy. It is to be useful, to be honorable, to be compassionate, to have it make some difference that you have lived and lived well." Beverly embodied this statement, and throughout her life, her central focus was community leadership and education.

Beverly took charge and organized with zeal. Numerous organizations felt her presence and influence, both on a local and state level. While she would disapprove of being lauded, following are a number of the groups that Beverly touched during her life in Kimball County: charter member of the local PEO chapter GN; Member and volunteer for the Presbyterian Church and Sunday School; Advocating Farm Bureau membership and taking leadership roles on the county and state level; Co-founder of the Kimball Concert Association and putting in phone and meeting time for Community Concerts membership drives; Guiding the school through transitional times on the Wasatch Academy (Utah) Board of Trustees; after Vance graduated from that boarding high school. Developing and organizing the Ag in the Classroom program and the Ag-Fest field day, where local students were taught the importance of the agriculture economy; Writing entertaining "pen pal" letters to elementary classes in the eastern end of the state (as well as making a surprise class visit or two with the family Dalmatian); and Providing a representative voice for the western end of the state on the KRVN radio and Nebraska Public Television boards.

She touched many lives, and her sense of organization and purpose of duty will be greatly missed.

She was preceded in death by her parents. She is survived by her husband, Kendall, and passed just two weeks before their 60th anniversary. She is also survived by her son Vance, and daughter-in-law Seana Davidson-Atkins and step-granddaughters Michaela and Claire.