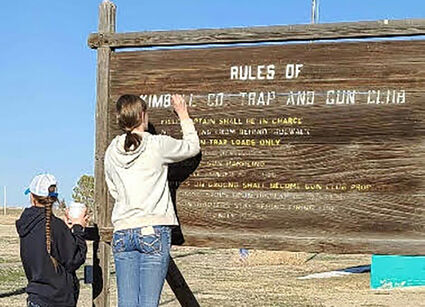 Members of the Kimball Longhorn Trap Club have invested hard work and time into cleaning up and painting the trap shoot area at the Kimball Rec Area.

After a lengthy absence, a trap shooting club has returned to the Kimball area.

Spearheading the renewal of trapshooting was Brittany Cook, but she is quick to give credit to many others that helped get the event going.

"Kelly Garrett was so helpful in pointing me in the right directions and to the right people to get everything lined up," Brittany said. "Jeremy Williams worked with us and got (support from) the Park and Rec board. The school worked with us to allow us to use the name (Kimball Longhorn Trap Club) and let our ninth to 12th graders have the ability to letter. Kelly and Sean...