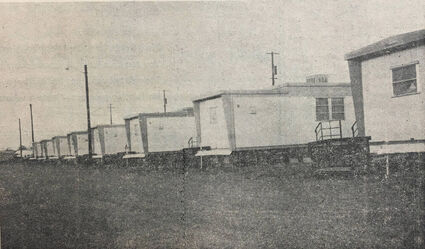 This photo was in the Feb. 14, 1963, edition of the Western Nebraska Observer that reported the arrival of 16 trailers, the first to be placed in Boeing's Trailer City. New development plans are in the works there.

In February 1963, 16 trailers were brought in and parked in the area east of the Sunnyview Addition in Kimball, the start of what would be known as Boeing's Trailer City.

According to the Feb. 14, 1963, Western Nebraska Observer, 150 trailers would eventually house missile families. The area would be complete with streetlights, fire hydrants, and telephone lines. Missile families would call this their home for the next few years.

After the late '60s, the trailer park held far fewer than 150 trailers and eventually the facility would fall in disarray and be designated as a blighted property...