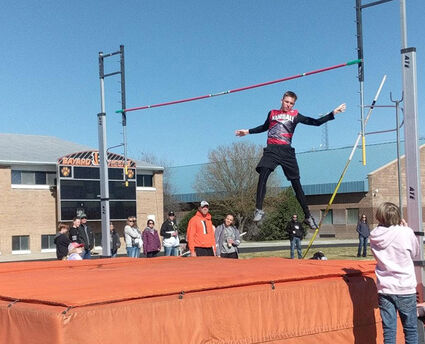 Kimball's Longhorn track and field team has a busy week, excelling at the Tri-State Invitational Meet in Chappell last Tuesday and then facing a higher level of competition at the Bayard C-D Invitational on Saturday.

At Tri-State, the girls scored big in the hurdles with junior Kaitlin Heeg winning the 100 meters and placing second in the 300 meter hurdles.

Senior Ashlynn Guzman placed third in the shot put and fifth in the discus and senior Raven Johnson won the pole vault.

For the boys at the Tri-State, scoring well for the Longhorns were senior Connor Cluff and freshman Braylon Miller taking third and fourth in the 1600 meters – and senior Christian Allen-Van Pelt scored big for the Longhorns, winning the triple jump, placing second in the long jump and placing third in the 110 meter hurdles.

Kimball ran into a higher level of competition on Saturday in Bayard, and had solid performances but not the same success as at the Tri-State meet.

Highlights for the girls included Ashlynn Guzman placing fifth in the discus and Raven Johnson placing second in the pole vault. Kaitlin Heeg won the triple jump and placed second in the long jump, giving the Lady Longhorns a good boost of scoring.

The Longhorns next travel to Mitchell on Saturday to compete in the Western Trails Conference Meet.