Ace Is The Place For New Owner 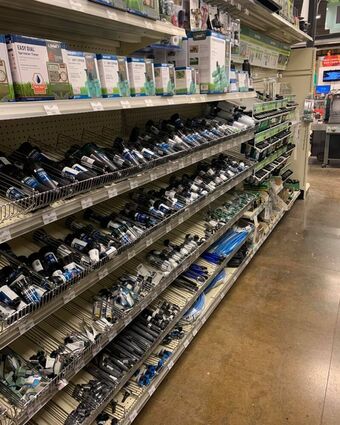 Jeff Lepp says he plans to carry a wide inventory at his Kimball Ace Hardware in the old Shopko building. This photo is in his Chadron Ace Hardware.

The new name is Kimball Ace Hardware, according to owner Jeff Lepp. Lepp spent about 40 minutes telling the Observer about his new store in Kimball.

"We have extraordinary plans for this location," he said.

Lepp likes the Ace Hardware brand because most of the stores are independently owned and operated.

The store will be a work in progress, especially the first year, due to multiple problems with trucking, vendors, supply chain, signage, licensing, and labor for the work to be done in the building. Initial thoughts were that they could have the store open by June.

Still, with all the delays and issues, it looks like an August opening date is more feasible.

"We are at the mercy of the vendors," and sometimes it takes years to develop relationships with vendors, Lepp said. "The first years will be challenging."

Lepp said that the facility will "have an insane amount of products," including clothing, apparel, sporting goods, camping, hunting, fishing gear and "absolutely guns." He said the facility "will have a well-stocked gun shop."

He said the store will be beneficial to the town and have lots of different products. Lepp sees this store as a draw-off of I-80 and Highway 71, both north and south.

Every square inch of the store will be used, he said. Lepp indicated that not immediately, but they intend to have farm and ranch supplies soon. Those products maybe be a little slower to arrive, but that is the direction they want the store to go.

The Chadron Ace Hardware and Annex owned by Lepp was opened in 2014 and is about half the size of the Kimball building. The Kimball store will drastically reduce the need for locals to travel out of town to obtain products, therefore keeping money and taxes in the community, Lepp explained. He said the store will be part of the community and will have a ripple effect, improving traffic and purchases to other local businesses.

Expecting to employ at least 20 people, maybe more, Lepp said when the opening date gets closer, they will have a job fair. He expects his employees to be "professional, friendly, polite, helpful" and focus on customer service.

Born and raised on the East Coast, Lepp transitioned to Colorado in 1990, then purchased a ranch in Dawes County in 2009 where he said he hopes to "retire." Then he stopped himself and said he will probably never retire, but he wants to spend a majority of his time on his ranch.