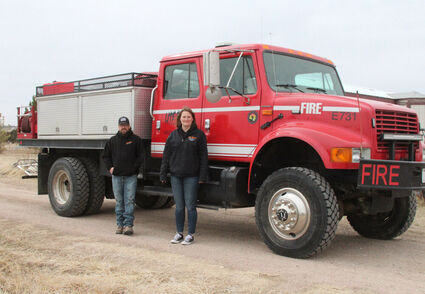 JT and Genie Evans of Harrisburg both work for Light Em Up Custom Burning, Inc. JT and Jeannie are pictured with "Clifford" ­– a Type 3 truck used mostly in mountainous regions to fight federal fires.

Rick Craig has a soft spot in his heart for Harrisburg and Banner County.

Craig was raised in Harrisburg and would have graduated from BCHS in 1994 if he hadn't moved his senior year to the eastern part of the state, but Banner County still holds a special spot, and he knows many of the area people.

Now living in Seward, Craig and his partners, Bob and Dez Viger, are owners and operators of Lite Em Up Custom Burning, Inc., which they started in 2012 with just one truck. They just completed their fifth year of their Federal Wildland Fire Contract with four truc...