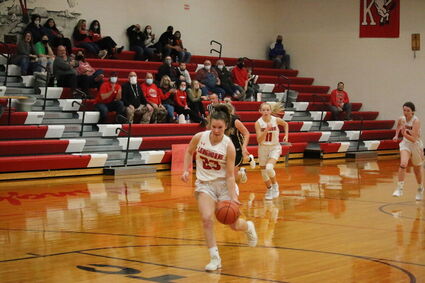 All three of these Longhorns have earned Western Trails Conference post-season recognition for their play on the basketball court. From left are Megan Spicer, Chantel Malson and Sydney Biesecker.

The winter sports season ends with the announcements of all-conference selections for the Western Trails Conference – and Kimball High School had a number of athletes who were named and recognized.

Among the Longhorn wrestlers, 145-pounder Trey Schindler earned a place on the All-WTC team for his performance during the 2020-21 season.

On top of that, three Kimball student-athletes were named as wrestling honorable mentions, adding to the school's mat legacy.