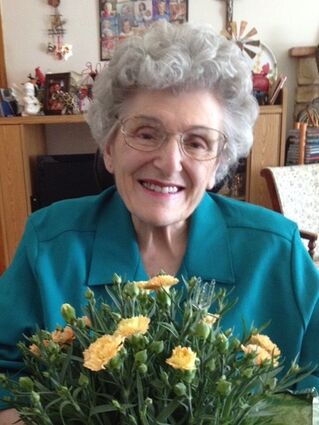 Antonia C. Bourlier, 94, of Kimball, died at Kimball Health Services on Monday, March 1, 2021. Funeral services will be held at 10:00 a.m. on Tuesday, March 9, 2021 at St. Joseph's Catholic Church in Kimball with Father Mike McDermott and Father Robert Karnish officiating. The service will be live streamed through the Cantrell Funeral Home Facebook Page. Burial will be held in the Kimball Cemetery following the funeral service. Visitation will be held from 4:00 until 6:00 p.m. on Monday at the Cantrell Funeral Home in Kimball. Friends may visit http://www.cantrellfh.com to leave condolences and stories for the family. In lieu of flowers the family asks that memorials be given to the Legacy of the Plains Museum in Gering, Nebraska, the American Diabetes Association or the donor's choice. The services for Antonia have been entrusted to the Cantrell Funeral Home.

Antonia Catherine Bourlier was born in Brooklyn, New York on March 3, 1926 to Domenic and Catherine (Arenella) Monaco.  She was the fourth of five children. Antonia attended school in New York, studied fashion design, and one of her jobs was as a bomb inspector for the War Department. She met Vernon Bourlier in Central Park when he was on leave from military duty.

Vernon and Antonia were married in St. Cecelia's Church in Brooklyn, New York on July 14, 1946 and made their home on a farm south of Bushnell, Nebraska in 1948.

Having started out as a city girl Antonia found extension services offered by the University invaluable to her new life on the farm. She continued her education by taking a variety of courses to learn Economics, accounting and marketing all of which she made use of to make the farm successful. In addition to being a lifetime member of extension, Antonia participated in a variety of service organizations.

Nebraska was a stark change from the city. She saw the blizzard of '49 and even the Northern Lights. Antonia witnessed the implementation of many improvements to rural Nebraska including formal roads, indoor electricity and the establishment of the Rural Electric Association (REA), indoor plumbing, automatic washers and dryers, rotary telephones with party lines and later cell phones with built-in cameras, black/white box TVs and antennae, followed by flat screen LCD TVs and cable, movie cameras that became video cameras, microwaves and convection ovens. The evolution of farm equipment such as tractors with steel wheels to tractors with GPS.

Antonia was kind and compassionate, and she dedicated her life to community and family. She was an avid reader, particularly of history, and especially Egyptian history. She enjoyed her trip to Chicago to see the Treasurers of King Tut. She was a member of the Tidy Ten Club, for 60 years (a group of women who organized community improvements), Alpha Tau Sorority, Women In Farm Economics (WIFE), Farm Bureau, Cattle Women, a 70+ year member of St. Joseph's Catholic Church, and the Rosary Altar Society. She volunteered for Meals on Wheels, was active with Girl Scouts, Blue Birds and the Campfire council, participated in square dancing, called numbers for bingo at the Kimball Manor and was influential in the implementation of the Book Mobile which provided regular stops for rural residents.