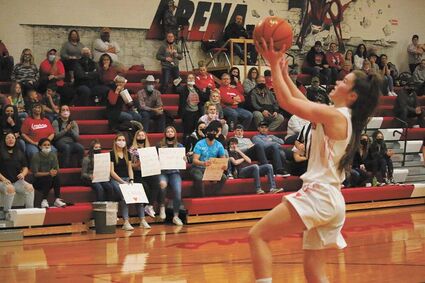 Kimball's Lady Longhorn basketball team was unable to improve its record over the last week, dropping a contest on the road against Morrill and then falling at home to Pine Bluffs.

Kimball traveled to Morrill last Thursday Feb. 4, and both teams started hot, while the Longhorns struggled with turnovers.

Ilycia Guerue was the standout for Morrill, cutting through the Kimball defense while causing turnovers and stealing the ball away from the Lady Longhorns all game.

After opening a five point lead at the end of the first quarter, Morrill allowed six Kimball points in the second quarter to take a 29-18 lead into halftime and went on to win 54-36.

Kimball senior Sydney Biesecker and junior Payton Wise each had 13 points to lead the Longhorns in scoring. Guerue scored 27 points and 18 steals to lead Morrill.

Next the Lady Longhorns hosted the Pine Bluffs on Tuesday, February 9, and the Lady Hornets opened with a strong offensive first quarter to take a 17-10 lead. Both defenses tightened in the second quarter, but Pine Bluffs held its advantage and built a 26-15 lead at halftime before pulling away for a 58-41 victory.

The Lady Longhorns record fell to 3-12 on the year, and they were scheduled for subdistrict play Feb. 15 and 16.

Kimball's Longhorn basketball team tried again for its first win of the season, hosting the Pine Bluffs Hornets on Tuesday Feb. 9. The Pine Bluffs squad came into the contest at 7-7 on the season following an 18-point loss to Upton the previous Saturday, but the visitors showed no ill effects and sprinted out to a 30-9 lead at the end of the first quarter. The Longhorns shot better in the second quarter, but Pine Bluffs went on to an 88-39 victory.

Kimball had a few bright spots in the game, as senior Cole Henton scored 10 points while freshman Wyatt Cords was sharp from the field, going 5-for-6 on 2-pointers and 3-for-8 from beyond the 3-point arc for a total of 19 points.

The Longhorns are next scheduled to play Mitchell on Friday, Feb. 19.