Both Kimball Teams Ousted In First Round Of WTC Tournament 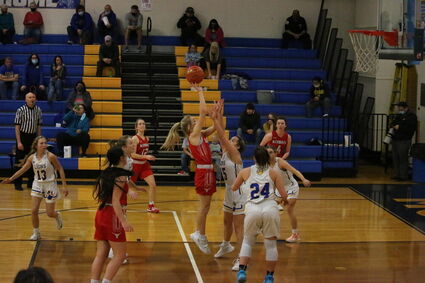 Chantel Malson takes a shot inside the paint against Morrill in the first round of the WTC Tournment. The Longhorn junior had 3 points on the game.

It was a team highlight during a week in which the boys lost to Perkins County and both the Longhorn boys and girls were outsted early in the Western Trails Conferece Tournament.

The Kimball boys, meanwhile, lost to Perkins County 69-34. They trailed 26-14 after the first quarter and Perkins built on its lead from there. Individual statistics were not available for Kimball.

In the WTC tournament, the girls lost 54-36 to Morrill in the first round on Thursday, Feb. 4.

The Longhorn boys lost in the WTC first round to Mitchell. They trailed 28-8 after a quarter and fell by a final score of 79-30.

The boys are winless on the season.

This week's schedule for both Kimball teams had them hosting Pine Bluffs on Feb. 9 and on the road Feb. 12 at Hemingford.