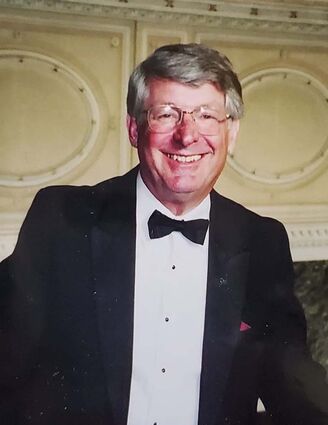 George was born March 23, 1940, on a farm in Kimball, Nebraska, to Henry and Ella Cordis Stahla. When George was 5 years old, his mother Ella died in childbirth. It was a pivotal moment that shaped his life because he assumed the role as big brother to his siblings. He was the oldest son of 11 children.

He graduated from Kimball County High School (Class of 1958) and attended the University of Northern Colorado, where he earned a bachelor’s degree in Business with a minor in Fine Arts. He was a member of the Sigma Chi fraternity. He married Sharon Schmidt on Nov. 22, 1962. Together they had three children, Chris, Cindy, and Jeff, and later divorced.

George had an incredible work ethic. He started Stahla Mobile Homes locations in Greeley, Colorado, and Evans and Cheyenne Wyoming, providing much needed housing for families in these communities.

Years later, when working as a loan officer at First Security Bank in Rock Springs, Wyoming, he met Maria Vescio, who worked at the Salt Lake offices of First Security. They dated for several years, and George fell in love with Maria and her parents. He moved to Salt Lake City, and proposed on Christmas Eve. They were married Oct. 19, 1985, and together had three children, Rosa, Gina, and George.

George was a devoted and loving father. He could be firm, but was attentive, kind, and always fair. He had high expectations, and was proud of all of his children’s accomplishments. He remained deeply connected to his extended family living in many states.

George was a licensed insurance agent in Utah and earned his Series 6 and 7 licenses through the Securities and Exchange Commission. He was awarded the Certified Financial Planner designation and worked as a Senior Financial Advisor for Waddell & Reed in Salt Lake City and was later promoted to the position of District Manager. He retired from Waddell & Reed after 20 years.

George was a devout Catholic and servant of God. He was a member of St. Andrew the Apostle Catholic Church and a Knight of Columbus. He and Maria were also inducted as members of the Equestrian Order of the Holy Sepulchre of Jerusalem.

He enjoyed flying, and held an active pilot’s license for many years.

George was preceded in death by his parents; sisters Rosie Walsh, Jean Winchester, and Mar Hilkemeier; and father-in-law Antonio Vescio.

Memorials are to the Capital Campaign at St. Andrew the Apostle Catholic Church in Chandler, Arizona.