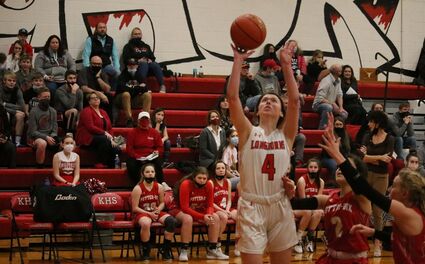 Senior Sydney Biesecker led the Longhorns with 16 points against Mitchell.

Kimball's Lady Longhorn basketball team continued to struggle with three losses over the past week to fall to 2-10 on the season.

On Tuesday, January 26, Kimball hosted Mitchell, and the Lady Tigers were able to open a five point lead a tthe end of the first period, 17-12. The Lady Tigers then increased the defensive pressure, holding the Lady Longhorns to just six points in the second quarter as they built at 33-18 lead going into the intermission.

The third quarter had Mitchell again clamping down on the Kimball offense, allowing just three points in the frame, foiling any chance of a Kimball comeback.

Mitchell cruised through a 15-to-10 fourth quarter to earn the 65-31 victory.

Senior Sydney Biesecker led the Lady Longhorns with 16 points in the loss.

On Friday, the Kimball squad travelled to face off against the Sutherland Lady Sailors, a familiar opponent that Kimball had just lost to by 10 points on January 22.

Lady Sailors started strong, opening an eight point lead at the end of the first quarter, 14-6. Kimball battled back in the second period, but still trailed by eight at the half, 24-16.

Both teams struggled for points in the second half, but Kimball was unable to close the gap and fell by a final score of 43-31.

Junior Katie Heeg led the Kimball scoring with 15 points in the loss.

Finally, the Lady Longhorns hosted St. Pat's on Saturday, and the D1 powerhouse had no trouble getting up on the Lady Longhorns early and continued to score on their way to a 70-36 rout. St. Pat's had three scorers in double-digits, led by sophomore Tonja Heirigs' 26 points.

Kimball was scheduled to host Perkins County on Monday and then play at Morrill on Thursday in the Western Trails Conference Basketball Tournament.