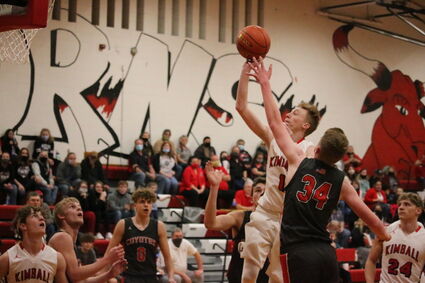 Cole Henton's eight steals in the St. Pat's game tied him for third for steals in a game for Kimball. He's shown here shooting against Potter-Dix.

Kimball's Longhorn basketball team continued to struggle for wins, falling in two contests in the past week to drop their season record to 0-11.

Kimball first traveled on Friday to take on the Sutherland Sailors, looking to avenge a 30 point loss from January 21.

However, the Longhorns fared no better this time around, getting shut out in the first quarter en route to a 25-4 halftime deficit.

The scoring slowed for both teams in the second half, but the 21-point lead was far too much for the Kimball squad to overcome, and the Longhorns fell by a final score of 48-18, their second 30-poin...