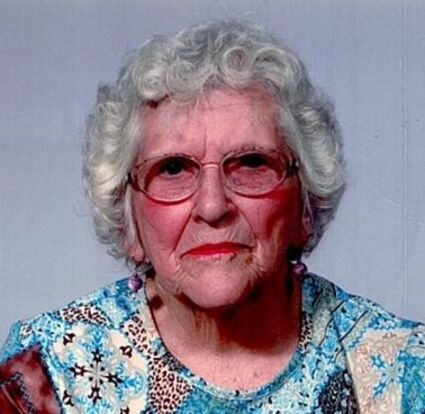 Inabell L. Petsch, 97, of Kimball, died at Regional West Medical Center in Scottsbluff, on Tuesday, January 26, 2021. Memorial services will be held at 2:00 p.m. on Thursday, February 4, 2021 at the Cantrell Funeral Home in Kimball with Pastor Rich Thomas officiating. Inurnment will be held at a later date. Friends may visit http://www.cantrellfh.com to leave condolences and stories for the family. Memorials may be given in her memory to the First Baptist Church in Kimball. The services for Inabell have been entrusted to the Cantrell Funeral Home.

Inabell Lucille Petsch was born in Forbes, Colorado, on November 14, 1923, the daughter of Monroe and Letha (Zickefoos) Stephens. She graduated from high school in 1941. Inabell was married to John C. Johannsen in Lyons, Kansas. They lived and farmed in Kansas and to this union 3 sons – John, Jim and Jean – were born. Her husband John preceded her in death in 1958. Inabell continued to live in Lyons until she married Everett Petsch in 1966, and he adopted her three sons. Following their retirement in 1972, they moved to Kimball.

Inabell was a member of the 1st Baptist Church in Kimball and was an active member who loved her church family. She was a member of the Kimball Senior Friendship Center and served as a representative on the Nebraska Aging Commission. Inabell was a wonderful seamstress and enjoyed sewing and making crafts for her family and friends. She was an avid traveler, and enjoyed many trips to Alaska, Hawaii, and Washington D.C. She also enjoyed taking bus tours to many different destinations in the U.S.

She was preceded in death by her parents, both husbands, brothers Austin and John, and sisters Juanita Hensley and Betty Randles.