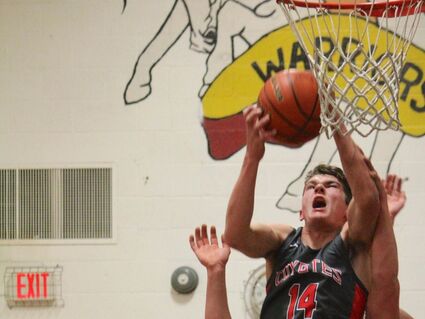 Potter-Dix's Luke Kasten goes way up for a rebound in the Coyote's 58-53 win over Leyton.

Potter-Dix's Coyote basketball team continued its strong play with three big wins over the week and are looking strong going into this week's MAC Tournament.

The Coyote's started last weeks' action off traveling to Kimball to match up with the winless Longhorns, and a slow start combined with a strong showing by Kimball kept the game close in the early going. But Potter-Dix broke the game open in the second quarter on their way to an 82-26 victory.

Friday's matchup against Leyton in Dalton would prove...