Longhorn Girls Return To The Court 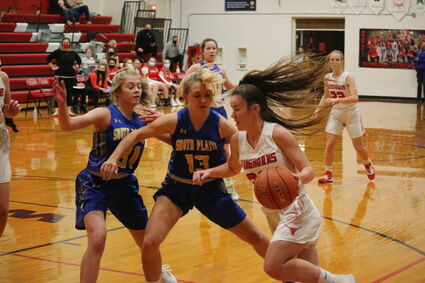 Longhorns leading scorer Megan Spicer drives inside on South Platte during the Jan. 5 game at the Kimball High gym.

Kimball's Lady Longhorn basketball team returned to action after a COVID-19 induced break in December and first faced off against the South Platte Lady Blue Knights at home on Tuesday, January 5.

Both teams were rusty to start the game, with the high-scoring South Platte team only putting up 10 points to Kimball's five in the first period. But the Lady Blue Knights found their rhythm in the second period, and the offense took off for a 22-point explosion to head into the half leading 32-14.

South Platte continued to play well through the second half, adding 18 poin...