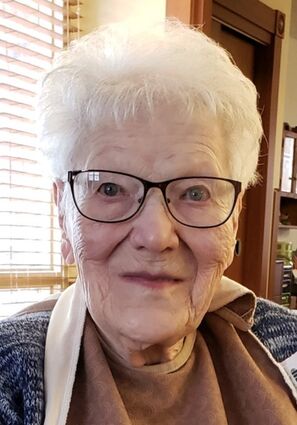 Emogene Marie Parker-Burt (Jeanne), 97, died on January 6, 2021, at Louisville Care Center in Louisville, NE. where she had resided for the past 7 years.

Jeanne was born in Olathe, Kansas, on February 4, 1923, the eldest of 3 daughters. She was raised in Rawlins, WY. During her senior year at Rawlins High School, she was elected to the Quill & Scroll Journalism Honor Association, and she interviewed First Lady Lou Henry Hoover. She was a member of the Order of the Eastern Star Job's Daughters. She graduated in 1941.

Jeanne worked as a Stenographer at UPRR, where she met Ervin Burt, whom she married in 1952. They were married for 58 years until Ervin's death in 2010.

Jeanne was first a mom and homemaker. She also held various jobs throughout her life including teacher's Aide and Bushnell Correspondent for the Kimball Observer. Outside of work, she was active in volunteering her time to her community. She was particularly proud of being awarded the Aksarben Good Neighbor Award for her dedication and service to others in need.

Jeanne loved cooking and shopping. Her grandchildren will always remember her in the kitchen making her home cooked meals. She was well-known at the local grocery store for her large purchases of grocery for herself and often others. She was an avid bargain hunter with coupons at arm's reach while shopping. She loved finding little shops, especially in Estes Park, CO, and searching for nicknacks with a keen eye for Angels for her ever-growing collection.

She also enjoyed gardening, crafts, and socializing. Jeanne filled her yard with flowers which she diligently tended to daily. She kept busy at her nursing home making posters and wreaths which were hung around the facility for holidays and special occasions. Always the social butterfly, Jeanne could talk with anyone and found friends everywhere.

A celebration of Jeanne's life will be held at a later date.