I WRITE FOR TOM SOUTHARD 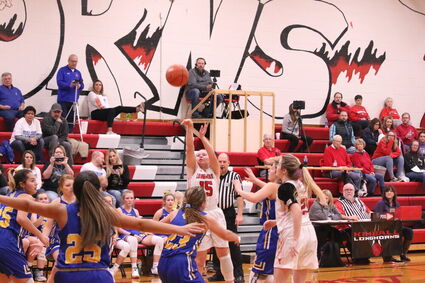 DREW BIESECKER / FOR The Observer When Carli Wurdeman (15) played ball for the Longhorns, Tom and Karen Southard usually were there. At right, the longtime Observer sportswriter and his wife sit in the stands last season while Carli pops a jumper.

Today, I write for Mr. Tom Southard. An extraordinary man who I was beyond blessed to have the opportunity to know, to talk with, and to meet in the first place. He was the man that so many students and athletes at Kimball High School looked up to and honored.

I remember first meeting Mr. Southard back in seventh grade. I will be honest, I had no idea who he was, but he knew who I was, as he knew everyone. Throughout my years at KHS, I grew to know Tom as a supporter of not only me, but Kimball as a whole.

Tom was a huge supporter and cared for everyone that he ever crossed paths with, and this is just the beginning of his story.

Tom and his wife, Karen, made it to every sporting event I can remember, and let me tell you, if anyone ever deserved an attendance award for anything, it was those two.

Tom and Karen drove hours for away games even when some of our parents could not make it. They were a sight in the stands that became normal for us athletes.

On days when I had bad games, I remember dreading seeing those two because I was embarrassed, I had let them down. However, as we all know, Mr. Southard would shake my hand or give me a hug and say, "Good game Carli, way to play your heart out."

As every player walked by him, he greeted them the same. I do not believe I ever heard him say a negative word in my time of knowing him. He had a contagious smile that, fortunately, I will never be able to forget.

His writing was something that defined who he was. When I say Tom wrote about only the things he cared about, I mean it, but Tom cared about everything. The person, the event, or the coach, it did not matter. He gave recognition to people who never thought they were being noticed or making a difference. Tom was the special set of eyes that recognized when people needed encouragement or even just a few kind words.

This is why today, I write for Tom. I write for someone who did his duty as a person continually doing the right thing, but also ended up being one of the most influential people to step foot in Kimball.

I write to give him the recognition he probably never thought he deserved, but the words of kindness that were due to come his way.

I write for Tom because his happiness, joy, and legacy will never be forgotten by the many people he touched so deeply.

The students and community of Kimball will miss him greatly but what's known is the memories he created will remain as the years roll on and days pass by. I offer my deepest and most sincere condolences to the Southard Family through this difficult time.