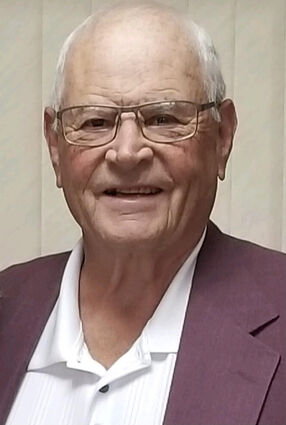 Tommy Mackland (Tom) Southard, 84, of Kimball, Nebraska, passed peacefully, with family by his side, on December 6, 2020 at Great Plains Health in North Platte, Nebraska. Tom had a short bout with COVID pneumonia.

Cremation has taken place. There will be a celebration of life held at a later date, when the pandemic has ceased and his loved ones can join. Friends may visit http://www.cantrellfh.com to view Tom's tribute wall and leave condolences and stories for the family. Memorials may be given to the Kimball Athletic Department. The services for Tom have been entrusted to the Cantrell Funeral Home.

Tom was born on Jan. 31, 1936 in a small, primitive home in Dix, Nebraska. The son of Charles and Anna Amanda (Johnson) Southard. He was the second to the youngest in the family of 11 children. He attended school in Dix and Kimball, graduating from Kimball in 1953. Tom was very sports involved, earning numerous honors in track, basketball, and football. He received a full ride football scholarship to Chadron State College. Tom joined the Navy in 1956 and served his time at Miramar Naval Base in San Diego, California, helping direct planes. After exiting in 1957, he returned to Kimball.

He met the love of his life, Karen Kay Baker, at Trail Days in Pine Bluffs, Wyoming and they were married October 19, 1958. This was the beginning of a 62 year marriage. Side by side, Tom and Karen proceeded with their on-the-move, involved, fun-filled venture. Their children joined them in 1963 and 1966 and accompanied their parents in the fast-paced adventure. Sports were the main event, competing and spectating until the end. On any given weekend you might see the couple dancing if there was a celebration going on!

Tom worked at many different businesses, including construction for Myron Tritt, Plains Body Shop and Western Office Supply. He managed the KIMB Radio Station while writing sports for the Western Nebraska Observer. He was a salesman for Larry Larson Ford, which extended into Chuck Benstead Ford and Bill Dickerson Motors, for many years, eventually purchasing his own used car dealership. Throughout the entirety of all these jobs, Tom continued writing (typing on a typewriter) the sports for the Western Nebraska Observer, totaling 56 years, never retiring. His love for athletics and kids was abundant. Tom earned many awards and honors from his writing passion, including Media Person of the Year, and most recently the Golden Pica Pole Club Award. He was nominated for induction into the Nebraska Journalism Hall of Fame Class of 2020. This has been postponed due to the pandemic but will remain valid for consideration.

Other loves and passions that filled his days were raising Labrador Retrievers and field trial competing with them, raising exotic birds, miniature donkeys and a spare farm animal here and there and running a dog boarding kennel on their property. Country music filled the house, playing, singing, dancing and attending concerts. Tom loved hunting and the great outdoors and shared in great snowmobiling adventures with family friends. In the latter part of life, family became the cornerstone. Tom was an amazing role model and mentor to many but mainly his children, grandchildren and great grandchildren. Tom golfed often and possibly had his most fun golf season ever in 2020. For years, he met the "Shriners" at noon at Four Winds every day possible. This led to lots of fun, conversation, joking and joy with good friends. The ol' guy even golfed his age the previous 5 years!

This past week Tom said he was at peace with his life and that he had lived 82 years longer than he should have. You see, Tommy was run over by a disk at age 3 and his parents were told he wouldn't live through the night. A few days later, the doctor said he needed to go home because he was bothering the other patients with his yodeling. A higher power than a doctor saw him through. Tom had polio in high school and recently mentioned he wished there had been a vaccine. Tom was an avid Christian, saying prayers every day and night for each member of his family and a lot more. He was a member of the Trinity United Methodist Church.

Other involvements were coaching little league, Jaycees and school board. Tom received, with his wife, Grand Marshals at Farmer's Day in 2001.