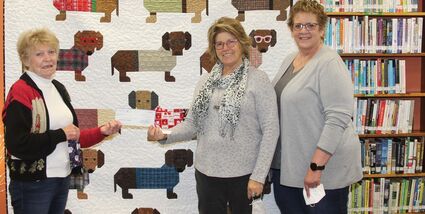 Members of the Kimball Quilt Guild, including Claude Jones, Jean Gilbert and Rhonda Gunderson, pose in front of the dog park fundraising quilt.

The Kimball Quilt Guild raffled off its group project, which was a dog quilt, on Saturday at the Kimball Public Library. The quilt was a project that brought 15 different members, each making a block on the quilt. The members donated their time and materials for the fundraiser.

Each of the 15 dogs on the quilt include 42 pieces, and it was estimated that each quilter spent 10-15 hours in preparation for the quilt, quilting it, trimming and adding the binding.

The beautiful, colorful quilt was a fundraiser for the Kimball Area Foundation Fund at the Kimball Community Trail. The quilt raised $1,149 for the High Point K-9 Park. The money will be used for the water faucet, which will be installed at the dog park.

Not only will dogs have drinking water at the park, but over 300 trees that have been planted at the community trail will be able to be watered by local volunteers.

Diana Larson from Enduring Stitches in Sidney donated the quilting and pillowcases for Kimball Quilt Guild.