This Week Opens With 93 Cases; Vaccines On The Way None Too Soon 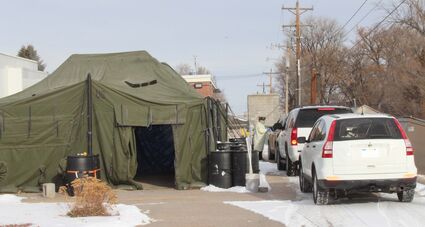 A Kimball Health Services employee conducts COVID-19 testing in the driveway behind the hospital Monday while people wait in line in cars for their tests.

COVID-19 has unleashed its fury on Kimball County during the past week.

According to covidactnow.org, Kimball County unfortunately leads the way in Nebraska in the percentage of daily new cases. The report lists the positive test rate in Kimball County at 60.4%.

In previous weeks, Kimball County had continually been within a 25-38 active daily case range, but by last Tuesday the number had climbed to 56 and by Friday to 91. Monday of this week the total of active cases was 98. By Tuesday, the numbers had dropped to 93 active cases.

Kimball County now has confirmed 289 cases during the pandemic, although 191 of those cases are recovered and now the county has six COVID-19 related deaths. The most recent statistics include a male in his 80s and a male in his 90s, according to Panhandle Public Health District.

The COVID-19 vaccine is on its way but hospital personnel will be the first to received the vaccine. Nebraska is reported to have about 15,000 vaccines being sent.

Nebraska as a whole has had a risk decrease and the state has moved from "orange" to "yellow" phase of its coronavirus pandemic response plan.

Gov. Pete Ricketts has issued new Directed Health Measures effective Dec. 12 which increase the capacity for indoor gatherings from 25% to 50% and elective surgeries can resume for most hospitals.

A media release from Ricketts' office said that the Nebraska "hospitalizations have decreased from where they were three weeks ago."