The Governor And Other Leaders Go To Bat For Sportswriting Legend 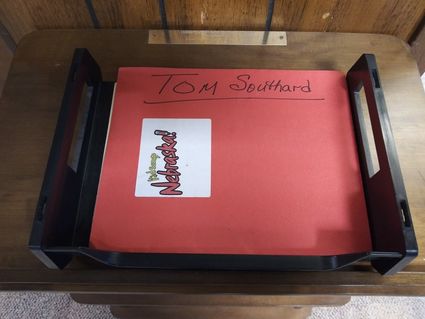 This folder in the Observer office is where Kimball sportswriting icon Tom Southard and his wife, Karen, picked up information sent to him to include in his weekly column, "Jock Talk," or his reports on scholastic athletics. He used a typewriter to type up every word of his work that appeared in the Observer over more than half a century.

Last year, back in the late summer of 2019, the Observer was in need of a sportswriter.

Tom Southard, the face of Observer sports since 1964, wanted to finally retire. Or at least scale back his writing a good bit and stay out of the cold covering football.

So the search was on. The search for someone to succeed Tom. Not replace Tom. Succeed him. Nobody replaces a legend.

As it turned out, nobody succeeded him. The job remained open as football season was kicking off.

So Tom did what he had done before. The old Navy man stuck around to save the ship. He kept writing sports for the Observer.

As Observer publisher, I appreciated this greatly and wanted to return the favor. I touched base with the Nebraska Press Association to first see if Tom already was in the Nebraska Journalism Hall of Fame and, if not, I was going to nominate him.

The process to try and get Tom inducted involves lining up important people to join the cause.

What I'm doing here, in this column that you're reading, is presenting letters of support for Tom's hall nomination from those kind of people. They represent a cross-section of leaders whose appreciation for Tom's significance as a journalist and a person comes from quite different perspectives.

And if you'd like to read my nomination for Tom, you can find it on the Observer's website. Just visit http://www.westernnebraskaobserver.net and search for "Tom Southard Hall of Fame." The nomination also appeared in our July 2, 2020, print edition.

As for the status of Tom's nomination, it's still alive. The induction of the hall's Class of 2020 has been postponed due to the pandemic, but his nomination will remain valid for consideration for at least two more years.

Rest in peace, Tom. I'm glad our paths have crossed.

And now, letters from some folks who appreciate Tom Southard and support the nomination to induct him into the Nebraska Journalism Hall of Fame.

This letter serves as my personal recommendation for Tom Southard to be inducted into the Nebraska Journalism Hall of Fame. Tom has been a sports writer for the Western Nebraska Observer in Kimball, Nebraska for over 56 years. He started his journalism career after serving in the Navy. Upon returning home, he observed a need for improved coverage of high school sports in the area, and persuaded the management at the Observer to give him a shot. His first assignment was covering a high school football game, and a long-standing writing career soon followed. While working for the Observer and maintaining his weekly "Jock Talk" column, he also found time to manage the local radio station, KIMB-AM, and sell Fords for a local dealership. After working over a half century, there have been times Tom considered retiring; however, his strong work ethic, loyalty and commitment to keeping Nebraskans informed has driven him to continue working to this day.

I give Tom my highest recommendation for induction into the Nebraska Journalism Hall of Fame. He has dedicated his life to journalism, and his longevity and perseverance in the journalism field are rare. I believe he is deserving of such a distinguished award.

I purchased the Western Nebraska Observer in 1962. Through my decades of ownership, I made many good decisions (and my fair share of poor ones), but one of the best decisions I ever made was to hire Tom Southard in 1964 to cover sports for the Observer.

Tom's devotion to sports writing is evident by the fact that he has now been doing it for more than half a century – well more than half of his life. He has covered hundreds, or maybe thousands, of football and basketball games, and countless track meets, cross country meets, golf matches and volleyball games.

Tom has recognized and throughout his journalism career has exemplified what sports – at least at the high school level – is all about.

Almost as remarkable is the fact that Tom's wife, Karen, has been side-by-side with him through the years, keeping statistics and sharing his love of sports. Truly, they're a team and the Western Nebraska Observer has been the lucky recipient of their partnership.

As former editor and publisher of the Western Nebraska Observer, and as a friend and former colleague, I wholeheartedly support Tom's nomination for the Nebraska Journalism Hall of Fame.

I am pleased and honored to write this letter of recommendation for Tom Southard. I believe that Tom is more than qualified not only to be considered but to receive the honor of induction into the Nebraska Journalism Hall of Fame.

My connection with Mr. Southard began in 1969, when I started coaching and teaching in the Kimball Public Schools. Tom was a regular at all of our sporting events, writing articles about the athletes, highlights of the games or matches, and also interviewing the coaches. The aspect that always impressed me about Tom's articles was his ability to remain unbiased.

I became the Athletic Director at Kimball in 1971, and with a different outlook on the sports programs it was easy to see what an impact that Tom's overall coverage of sporting activities had on not only the athletes but the community. Tom not only covered the Kimball schools but also the other area schools of Bushnell, Harrisburg, Dix and Potter. Some coverage of neighboring schools was limited because Kimball was number one on his list.

Tom has been writing for the Western Nebraska Observer for over 50 years, and I know he started writing before I arrived in Kimball. I know for a fact that many people in the community look forward each week to read his sports reporting. I play golf with Tom quite often and he keeps telling us is he going to retire, but each year there he is back at the games with his trusty, pencil pushing wife, Karen, keeping up with the statistics.

I was recently inducted in to the Nebraska Baseball Hall of Fame, and I fully realize the great amount of foot-soldiering it takes to go through the process of nomination and induction. I know that Tom and his ability to write played an important part in my induction. Tom is an excellent choice to be inducted into the Nebraska Journalism Hall of Fame.

Thank you for your consideration.

To whom it may concern,

It's been my pleasure to know Tom Southard for many years and he is the most dedicated sportscaster I have ever met.

He has found a way to contribute to his community by doing something he is truly passionate about, following the accomplishments of our local student athletes. Tom religiously identifies outstanding student achievements and makes sure they are known to our community.

The recognition Tom gives all our students not just on paper but in person makes them more confident in their lives and helps guide them in becoming appreciative, responsible adults.

Whenever there is a sporting event, you can count on Tom being there and then getting the report for the local paper done so all can have an accurate story. His passion for sports just doesn't end with local student-athletes, recently Tom traveled to Beatrice to share the achievement of a local friend and athlete, Dale Hendrickson, who was inducted to the Nebraska Baseball Hall of Fame.

Tom stays informed of graduated athletes and keeps our community apprised of their accolades. His article, "Jock Talk," in my opinion, is probably the most read article in our local newspaper. "Jock Talk" allows our community to follow the college careers of local athletes, such as basketball star Mike Daum.

Tom epitomizes what it is to be a great sports journalist, and he is an even better person, mentor, and friend. I believe he would be the most deserving of your Award.