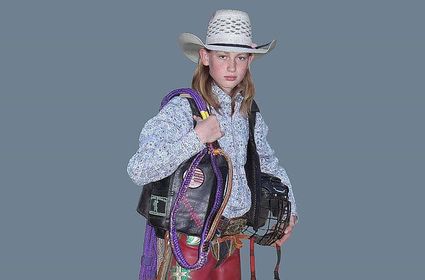 It's off to Texas for Cody Brinkman of Kimball to compete in the International Miniature Bullriders Association World Finals.

In less than a week, 13-year old Cody Brinkman of Kimball will climb aboard a mini bull to participate in the International Miniature Bullriders Association World Finals in Mesquite, Texas.

"I can't explain it; I love it," remarked Cody about riding mini bulls.

Cody qualified for the Dec. 7-12 World Finals while competing with a team out of Oklahoma, where the top two riders in the event qualified for the world finals. Competing in the senior division for 12- to 14-year-olds, Cody will ride Wednesday, Friday and Saturday next week. His goal at finals: "Do well, cover all my bulls."

Lots of bull riders have a routine, but the polite, well-mannered Cody said, "There is nothing to my routine."

At 3, Cody started his rodeo career riding sheep in Fort Collins. By 7, he transitioned to mini bulls weighing between 700 and 1,000 pounds. Now he has entered the senior division, which runs from March to October.

Although COVID-19 has thrown a few detours in his season, he travels to Oklahoma almost weekly to practice with his team and also participate in events. In addition to Oklahoma, this year he has ridden in Missouri, Texas and Kansas. Lots of events have been cancelled due to COVID-19, but he was still able to qualify for the finals.

Cody's mom, Amanda Bradney, said they usually leave for Oklahoma on Friday after school. On Saturday, Cody does his thing, either team practice or an event, and they return home on Sunday. She said she has put thousands of miles on her vehicle this year.

This will be Cody's first year participating in the world final against about 50 other riders in his category, but he is no novice when it comes to winning. In 2018, Cody took first place in the Kimball rodeo and in 2019 he won in the Pine Bluffs rodeo. With some encouragement, Cody has decided to branch out from the local rodeos and now he will ride at the world finals.

As an eighth-grader at Kimball Jr./Sr. High School, Cody also participates in cross country and wrestling.

The Observer will report on Cody's success at the IMBA Finals next week.