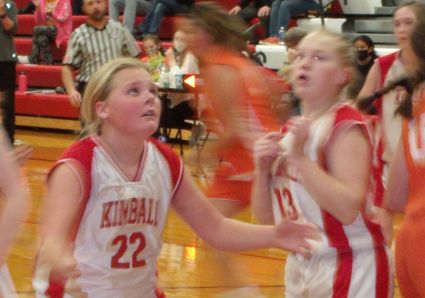 Kimball's Aubree Culek (22) and Grace Moore (13) position for a possible rebound during junior high play with Ogallala this past Thursday.

Despite COVID-19, local winter sports are ongoing with the Kimball Junior High wrestling and girls basketball underway, and the Nebraska High Schools were allowed to start winter sports practices this past Monday as well.

Kimball hosted its junior high wrestling tournament that we told you about in last week's Observer with a much smaller turnout, and as also reported, I have some individual results from that tournament for you readers this week.

Cody Brinkman was 2-2 on the day with two falls to his credit. Braxton Miller wound up 1-2, Trevor Fuss was 1-3, and Maison Holmes wrestled hard but ended 0-4.

It was good to see Kimball with six wrestlers competing at the Kimball tournament after having only 4 in the previous Banner County Invite.

Coach Wade Brashear said, "We had many compliments on the aggression our kids wrestled with. We are young and inexperienced, but we wrestle hard, and with pride. I am happy to coach this group of enjoyable young men. We wrestle at Morrill Friday (Nov. 20), and Tuesday (Nov. 24) we are at Grant."

The Kimball Junior High girls played their first games of the season this past Thursday, hosting Ogallala. Kimball had to cancel three other games on the schedule due to illnesses, etc. Ogallala won the A game 33-6 and the B game 10-5.

Addy Olson scored all 6 points for Kimball in the A game, while Anna Coleman scored 3 and Jade O'Rourke 2 for Kimball in the B game. Kimball coaches felt their girls played hard and gave effort but need to keep working on their basic skills.

"With all of the illness problems, we are lucky to have 8 girls at practice," said coach Katie Culek.

Kimball will host Pine Bluffs on Tuesday (Nov. 24) and then travel to Morrill on December 1.