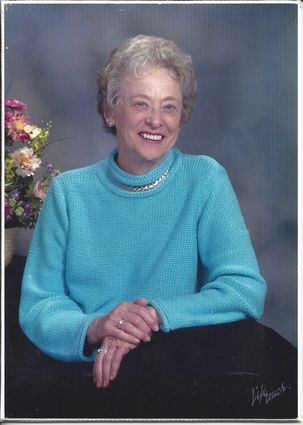 She was born October 21, 1931, in Saint Paul, Minnesota. JoAnne was the youngest of 4 children of Robert and Jennie Goranson. JoAnne attended Humboldt High School in Minnesota and graduated in 1949. She then went on to the University of Minnesota, graduating in 1953 with a bachelor’s degree in Economics Education and a minor in General Science. Being very active within the college community, she was a member of the Phi Upsilon Omicron Sorority (Professional Sorority), Eta Sigma Upsilon (Education Fraternity) and the Gamma Omicron Beta (Academic Sorority). JoAnne graduated with honors from Eta Sigma Upsilon recognizing her outstanding contributions to the University.

JoAnne began her professional teaching career in 1953 as teacher in Mora, Minnesota. Then in 1955 she moved to Denver, Colorado, and taught in the Denver School System through 1961. While in Denver, she was an avid snow skier and traveled extensively with her girlfriends.

JoAnne met her future husband, George Patrick Burke, while living in Denver and they were married July 8, 1961. Once married the couple moved to Kimball, Nebraska, where George was a partner in the law firm of “Van Steenberg, Myers and Burke.”

JoAnne and George began their family in 1962, having 4 children. Jennifer, Laurie, John and Dan became JoAnne’s greatest focus and she provided a wonderful life for her family. In raising her children, she became very involved within the community. Civic activities included: 8 years as President of Kimball School Board; President and Member of the P.E.O. Chapter D.T .; 4-H, Cub Scouts and Camp Fire Girls leader each for 4 years; President and Member of P.T.A .; and a Kimball Library Board Trustee. She also was very active within St. Joseph’s Catholic Church, being the organist and a member of the choir. After JoAnne’s children were grown, she worked at the Community Food Bank, where she got to provide not only food and clothing but friendship and support to many people in the Kimball community.

JoAnne and George began vacationing in Arizona and decided in 1997 to move permanently to Green Valley, Arizona. Golfing and keeping up with their children and grandchildren became their pastime during these years. George passed in 2001, and JoAnne moved to a senior community in Green Valley, where she once again became highly involved within the community. She taught swimming to youngsters at the preschool located on the senior community campus and also served on several community committees. JoAnne also enjoyed playing bridge, traveling and singing in the church choir at Our Lady of the Valley Catholic Church.

JoAnne is survived by her children Jennifer Biggs (Richard) of Tucson, Arizona, Laurie Tomczyk (Ted) of Lapeer, Michigan, John Burke of Scottsbluff, Nebraska, and Daniel Burke (Linda) of Sidney, Nebraska, and her seven grandchildren. She was preceded in death by her husband.

A memorial service will be held at a future date.

JoAnne was a person who served others in need throughout her life. If you wish to make a donation in her memory, please consider your local community food bank.