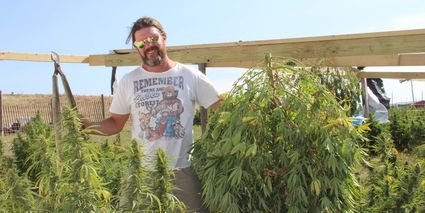 Medical marijuana and recreational marijuana are illegal in Nebraska. Only CBD oil and other products made from hemp are legal for possession and consumption according to the Farm Bill of 2018.

The finished hemp must test at no greater than 0.3% THC. If it tests above 0.3% then it is categorized as marijuana and must be destroyed because hemp and marijuana are the same plant.

Steven Schulte of Banner County is one of a few area people who jumped into the hemp business in Nebraska's second year of the program.

Schulte, a native of Kimball, joined the Marines out of high school, served his country in Iraq and then took advantage of the GI Bill to get an education. After a decade and a half in California, Schulte returned to the Panhandle to farm.

Up until now, Schulte had been involved with alfalfa but his curiosity peaked with the legalization of hemp.

The Nebraska Department of Agriculture manages and executes the Hemp program. In order to grow hemp in Nebraska, Schulte had to obtain a cultivator license, processor-handler's license and have the hemp tested, repeatedly. The license requires maps of planted sites, maps of drying sites, background checks and numerous rules and regulations.

After completing all the necessary licenses, in April Schulte purchased about 1,000 hemp seeds from Western Seed in Scottsbluff. He planted the seeds and had almost a 95% germination rate. The tiny seedling are very vulnerable early on. One night he lost 150 tiny seedlings to one mouse that gorged himself on hemp.

Although the mouse consumed some of his plants, Schulte was able to save and transplant outside about 700 plants, equaling out to about a half acre of hemp.

All 700 plants were planted by hand and then an irrigation system was set up to water the plants. The labor intensive crop thrived in the hot summer. No pesticides were used on Schulte's hemp as he purchased 100,000 lady bugs, 5,000 praying mantis and 25,000 green lacewing to organically control the insect problem.

But other problems cropped up in this new endeavor. Throughout the growing season Schulte had to fight with deer, rabbits and of course the weather. When it snowed in mid September, Schulte spent all night and early the following morning with a broom dusting off the three inches of snow in order to save his plants. He lost very few as a result of the snow.

Finally, on Sept. 23 harvest came, Schulte was able to chop his crop, individually, by hand of course, and then take each plant to the drying barn. After drying down for a few days in a controlled environment, the process continued in Torrington, Wyo., as the product was fed through a stationary combine.

Hemp is unique. It isn't like wheat or corn where it is combined in the field and then taken to the elevator.

Schulte said, "I can't just take it to the elevator, I have to make a product."

After the hemp was combined, he took it to Grover, Colo., to have it pressed and have the oil removed. The Grover company used a cylinder to extracted the oil, then made it into a lotion and packaged it. Hence, Schulte will have taken his tiny seeds and ended up with a final product to sell – CBD lotion.

Schulte's company is called The Hemp Company of Nebraska and his product is The Big Red Pain Relief.