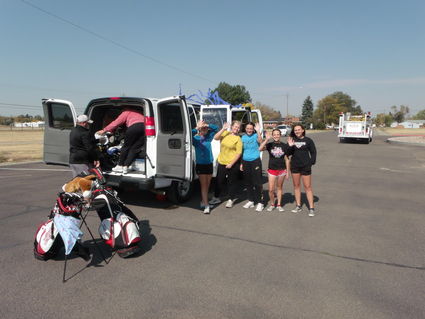 The Kimball Longhorn golf team's state tournament adventure began early Saturday afternoon with a grand escort to I-80 from the Kimball Volunteer Fire Department. Pictured next to the team van for their trip to Columbus are, from left, Katie Heeg, Brooklin Golding, Payton Wise, Maddie Cook and Keara O'Brien.

Another outstanding finish for Kimball junior Payton Wise as she wound up 6th in the final standings of the 2020 Class C Nebraska State Golf Tournament at Elks Country Club in Columbus. Payton slipped a bit on Day 2, shooting a round of 82 to finish overall with a two-day total of 166.

Brodersen of Boone Central won individual honors at 155, followed by Becker of Cozad at 157, Colby of Minden at 159, Lovegrove of Lincoln Christian at 162 and Mesti of Heartland at 164 – the only five girls to finish ahead of Payton.

Payton was the only Panhandle player to finish in the top 15 medal group – and the only girl from our district to do the same, including Valentine and Mitchell.

Senior Brooklin Golding was Kimball's second low player with her rounds of 108-106=214, a very good accomplishment in her first and only season of competitive play. She finished 55th overall. Katie Heeg had rounds of 115-109=224 in her second year to state golf with one more to go. Keara O'Brien, a sophomore, played quite well in her first trip to the big event with rounds of 117-119=236 and has made steady progress all season and will return to help the program two more years.

Things did not end well for senior Maddie Cook, who shot a very good round of 101 on Day 1 but had to withdraw from play after a reported seven holes on Day 2 complaining of chest pains, according to coach Katie Culek. Our sympathy from the Observer and all of Western Nebraska going out to you, Maddie.

Congrats going out to all of the Kimball High girls golf team members and to coach Culek and Chad Wise. In the next week or two we will take a look back at the season and also delve deeper into other great teams from Kimball High that made it to state tournament play.

Payton Wise was sitting in a 4-way tie for 3rd place after her first-day round of golf at the Class C State Tournament being held in Columbus. The talented junior, and two time State medal winner, got off to a good start and was in front of the pack after the first 8 holes.

But she slipped a bit from that point on and shot a still-good round of 82 along with 3 other girls. They had work ahead of them to catch the two ladies ahead of them as Abbigail Broderson of Boone Central and Lynzi Becker of Cozad were tied for 1st/2nd with rounds of 77.

It was a windy day as was forecast and Four Winds Pro Chad Wise, the father of Payton, said, "It was probably a two and a half club wind." He also said that "with all of the fallen leaves from the wind, it made it hard to spot the balls even in the fairway."

As a team, Kimball was holding down the number 10 spot in team scoring after Day 1 with a score of 406. Broken Bow was the leader after day one with 369. Other teams from the Western Nebraska District showed Valentine in 7th with a score of 400 and Mitchell at 14th with 430.

A good day for senior Maddie Cook, who shot Kimball's second best round of 101, which had her tied at 38th. Brooklin Golding, Kimball's other senior member, came on strong late to shoot 108 for a tie at 57th. Katie Heeg finished with 115 for a tie at 79th, and sophomore Keara O'Brien shot very well for her first experience at a state tournament ending up with 117 and a tie for 81st in the field of 93 golfers.